Pilot episode debuts with a series in the works if funded 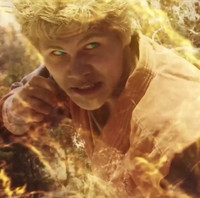 It's been a pretty good week for fan films. In addition to Joseph Kahn's POWER/RANGERS bootleg—which has since been removed from Vimeo thanks to Saban—there's also the pilot episode of Dragon Ball Z: Light of Hope.

Directed by Donnie McMillin and produced by Rita McMillin, Dragon Ball Z: Light of Hope aims to adapt the single-episode DBZ special The History of Trunks, or Defiance in the Face of Despair!! The Remaining Super-Warriors: Gohan and Trunks. The short stars Tyler Tackett as Android 17, Amy Johnston as Android 18, Anton Bex as Gohan, and Jack Wald as Trunks.

Those who want to see more of the Light of Hope series can contribute to Robot Underdog directly.

Here's a video that goes behind the scenes of the short's stunts and fights: