Dark Horse Manga Editor Discusses "I Am A Hero" 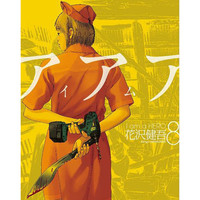 Last weekend, North American publisher Dark Horse announced a slate of new manga licenses at Anime Central that included Kengo Hanazawa’s award-winning zombie manga I am a Hero, set to be released in special omnibus volumes that will each collect two of the original Japanese books. Dark Horse Manga Editor Carl Horn has shared his thoughts on this manga, which has sold over four million copies in Japan and is slated to be adapted into a live-action feature. 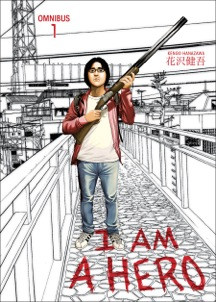 I Am a Hero is the saga of Hideo Suzuki, a struggling, mentally unstable manga artist who isn’t sure he can believe what he sees one night—a pedestrian, leg twisted and neck broken by an auto collision, gets up and keeps on walking. It might snap the sanity of most people. But when the dead are beginning to rise all over Tokyo, there are two things that might allow even a crazy man like Hideo to survive: the fact he feels destined to be a hero, and a certain possession of his that’s quite rare in Japan—a gun…

Writer and artist Kengo Hanazawa depicts the horror of a zombie apocalypse amid the crowded streets and dwellings of the world’s largest metropolis, as the densely-populated city explodes into a chain reaction of infection. Starting off in Tokyo, I Am a Hero takes us to the small towns and countryside of Japan as the survivors flee—and the world outside the island nation is no safe haven either! Hanazawa’s documentary-style and detailed yet action-packed and paranoid storytelling is in the more realistic manga style of artists like Gantz’s Hiroya Oku, with crossover appeal to comics fans as well as manga fans. Attack on Titan has been promoted as “The Walking Dead of Japan,” yet it is I Am a Hero that truly fits the description, not only for its story but also its critical acclaim; in Japan, I Am a Hero comes from the same magazine as did Naoki Urasawa’s multiple Eisner Award–winning 20th Century Boys, and won the same Shogakukan award for general excellence in 2013 that 20th Century Boys did a decade earlier in 2003.

We at Dark Horse, North America’s second-oldest manga publisher, have previously licensed manga from two of Japan’s “big three” manga companies, Kodansha and Shueisha. But I Am a Hero is Dark Horse’s first series with the third, Shogakukan, since we began releasing manga in 1988 with Kazuhisa Iwata’s Godzilla. This development shows how much the landscape has changed for the English-language manga industry, and we have been able to work with Shogakukan and acquire I Am a Hero due to the persistent work of our director of Asian licensing, Michael Gombos.

I Am a Hero is from Shogakukan’s magazine Big Comic Spirits, and, speaking as the former manga editor of the pioneering English-language seinen magazine PULP, it is a tremendous honor for Dark Horse to be able to publish a work from Spirits, which was also the original home of PULP titles such as Tekkonkinkreet and Dance till Tomorrow. More than a quarter century after Dark Horse began releasing manga, we have lost none of our enthusiasm for it and are proud to bring this new creator and publishing relationship into our diverse Japanese line. The 512-page I Am a Hero Volume 1, the first in an ongoing series, will be released in North America on April 6, 2016.

Tags
i am a hero, dark horse
« Previous Post
Nintendo World Championships 2015 Updated with Locations and Game
Next Post »
"Persona 4: Dancing All Night" to Get Down with Human Teddie and Margaret
Other Top News
7 Comments
Sort by: