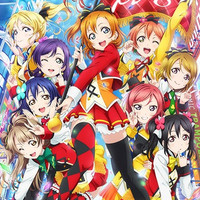 By the weekend of July 25-26, the all-new feature film Love Live! The School Idol Movie had earned an impressive 2 billion yen (about 16.24 million US dollars) from its domestic theatrical run. It keeps the same seventh position from the previous weekend.

The school idol-themed film has become the second most successful film based on a midnight TV anime series, only behind the 2013 film Puella Magi Madoka Magica: Rebellion with 2.08 billion yen.

Top 10 list for the films based on midnight TV anime series: