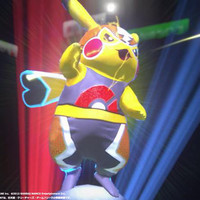 Pokémon Company has posted a preview for the Wii U release of Pokkén Tournament. The Bandai Namco collaboration fighter is set to brawl internationally in spring 2016. In the preview, new Libre Pikachu joins the arcade version's traditional variety of the electric mouse, Machamp and Gardevoir and well as support such as Pokémon Fennekin, Snivy, and Lapras.