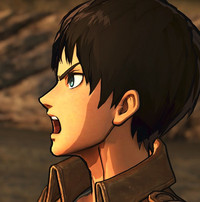 Forget trailers with brief snippets of footage, there's now around eight minutes of pure Attack on Titan gameplay online via YouTuber South Pathnet. See how Omega Force's crack at turning Hajime Isayama's mega hit into a game is going in the video below, which starts with some 3D Maneuver Gear training before moving on to actual Titans.

Koei Tecmo Europe shared a few clips from the demo on Twitter. Here's one:

Attack on Titan follows the story of the anime's first season, with Eren, Mikasa, Armin, Connie, Sasha, and Jean among the currently confirmed playable characters. It's coming to PlayStation 3, PlayStation 4, and PS Vita in Japan this winter, with a western release to follow in 2016.