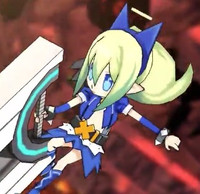 Publisher Ghostlight announced an official PC release date for Idea Factory's PlayStation 3 RPG Mugen Souls. The Steam release is set for October 22, and it will arrive priced at $19.99, with a 40% launch discount.

Ghostlight's PC release will come packed with 30 items of DLC from the console version as part of the base game for free. After that, more console DLC will follow on October 29, also at 40% off.

There exists a small galaxy in the universe containing seven worlds, shimmering in seven colours... These worlds exist and act independently of one another. This has allowed them to develop and nurture rich, unique cultures. Then one day, a decree was issued... "I'm gonna make everything in each of these worlds bow to me!" – The Undisputed Goddess, Chou-Chou!

Mugen Souls features a free-roaming battle map, turn-based combat, and massive amounts of customization and growth to maximize the fun players can have within the game.

Expansive worlds to explore: Travel freely on each world to explore and find treasures and items. Monsters are roaming the lands, so be cautious or fight them head-on and make them your subservient peons!

Free-roaming style battle maps: Use Combo attacks to execute spectacular moves with your allies! Destroy Crystals on the battlefield to activate Hyper mode!

Moe Kill: Execute the Moe Kill technique to enslave enemies and turn them into items by exploiting their weaknesses!

Duel in Dual Audio: Experience the game in either Japanese or English audio.

The PC version will feature mouse/keyboard and gamepad support and will also include Steam achievements as well as taking advantage of the higher resolutions and framerates that PCs can offer.  Along with a number of other user interface changes and major graphical enhancements, Ghostlight are aiming to ensure that PC gamers receive the best JRPG gaming experience possible!