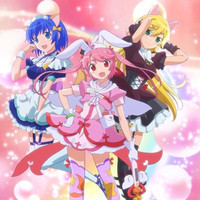 Keiichiro Kawaguchi, best known for his works for SKET DANCE, directs the series for Tatsunoko Production.

Cast also includes Hiroyuki Yoshino as Komugi's partner Usa-P, Daisuke Namikawa as Kokona's Tanu-P, and Ryota Takeuchi as Tsukasa's Neko-P. And it is also confirmed that each episode's villain will be played by veteran voice actors, such as 64-year-old Ryusei Nakao as Camera Kaijin in the first episode.

via  pKjd and Moe Tron