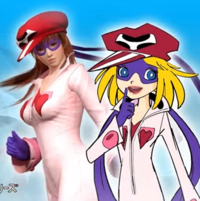 After last month's teaser of a Dead or Alive 5 - Last Round collaboration with venerable anime studio Tatsunoko that includes Ai-chan from Yatterman, with that series' Doronjo and the Yatterman Night version of the character, Gold Lightan, the leads for the new Nurse Witch Komugi-chan R and more, Koei Tecmo has now posted a preview.

We've teamed up with the legendary Japanese anime company Tatsunoko Production to bring in 16 costumes from some of their most celebrated series to the world of Dead or Alive 5 Last Round!

NOTE: Not all costumes include destructible functionality.