Latest anime has been running in Japan since 2014 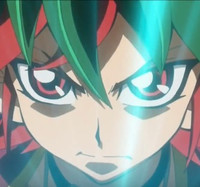 Nicktoons recently aired a teaser for its upcoming broadcast of the Yu-Gi-Oh! Arc-V anime, which has been running in Japan since 2014. Sample some of the dub ahead of its February debut below.

You can catch the manga adaptation in Viz's digital Weekly Shonen Jump.

Thanks to judaikun97 for the tip!