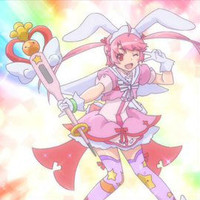 Sentai Filmworks has announced its latest acquisition, Nurse Witch KOMUGI R, as part of its winter 2016 anime lineup. The series will be directed by Keiichiro Kawaguchi (Moetan, Million Doll, Nyan Koi!), with Momoko Murakami in charge of series composition. Original character designs will be provided by Akio Watanabe (The World Only God Knows, Bakemonogatari), with production handled by Tatsunoko Production (Gatchaman Crowds). A home video release is planned.

One day, second-year middle school student Komugi Yoshida encounters a wounded, rabbit-like creature named Usa-P. She tends to its injuries, and in return is granted the powers of a "Legendary Girl." Now, in addition to juggling her school duties and her career as a pop idol, Komugi has to take on the role of a magical nurse. Watch the hilarity ensue in this slapstick comedy that throws in more magic and mayhem than this busy girl can handle!