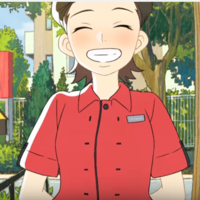 Studio Colorido, the indie anime studio who had done promo work for concept shops, Noitamina, Puzzle & Dragons and Marukome's miso soups, now bring their sentimental touch to working at McDonald's in a "Future Chapter" promo featuring Yui Yokoyama and the idols of Team 8, the "Idols who go meet you."

Each member of Team 8 comes from a different prefecture of Japan.