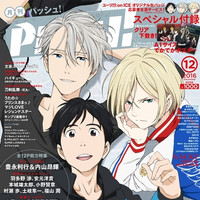 The official blog of Shufu to Seikatsusha's monthly anime magazine PASH! confirmed yesterday that its latest December 2016 issue became almost sold out only six days after the release in Japan on November 10, so the publisher has decided to print 10,000 more copies urgently. According to the data released by Japan Magazine Publishers Association, the magazine's estimated average circulation between July and September 2016 was 25,003.

The latest issue features the ongoing TV anime Yuri!!! On ICE on its cover and includes a special 12-page coverage of the anime, an A1-size (594 x 841 mm) poster, and a coupon to get the anime's original tin badge. Reprinted copies will be available at stores by the end of this month. Back in December 2015, the magazine also reprinted its January 2016 issue that came with a big poster of the TV anime Osomatsu-san/Mr. Osomatsu.