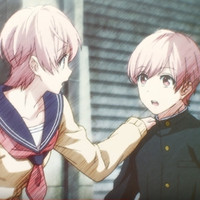 The clip features "Fast Impact," one of the soundtrack tunes for the anime composed by Hayato. The artist also serves as the producer of Love Desire, the four-member vocal unit who perform the anime's OP and ED songs. The members of the unit are scheduled to make their voice actor debut in the anime.

While all of the original voice actors of the game are confirmed to reprise their roles in the anime as well, the voice actress for the female protagonist Hinako Nakayama has not yet been revealed. The 10-minute short series is animated by project No.9 (And you thought there is never a girl online?) and A-Real

set for a Spring 2017 premiere in Japan.

PV for the PS Vita game

OP movie for the game