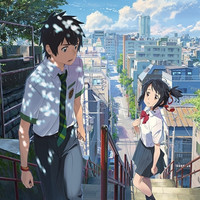 Osaka Prefectural Police announced yesterday that they had arrested three men in the prefecture, including a 48-year-old local government worker, on suspicion of copyright infringement (infringement of public transmission rights), and sent the cases to the Kishiwada District Public Prosecutors Office on February 20.

According to the police investigation, the three are accused of infringing the copyright of Makoto Shinkai's anime film Kimi no Na wa./Your Name. owned by seven companies including the film's distributor Toho. They used the file-sharing software Share to upload the film's file onto the internet and made it downlodable to the general public without the copyright holders' permission from September to October of 2016. All of them have reportedly admitted the charge and said that they downloaded the file to watch by themselves.

distributed only to the people concerned in the film industry. Back in November 2016, Shizuoka Prefectural

As reported, the production committee of the film has opened an official Twitter account dedicated to the

September, and has been posting their messages to ask people not to watch the film by illegitimate means.