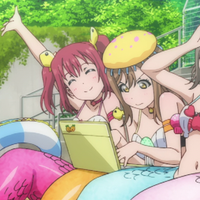 You can pick them up here.

The concert will be filmed in high definition and scheduled to broadcast live via satellite to cinemas in the countries that are close to Japan’s time zone including Australia, Taiwan, Hong Kong, Korea, Singapore, Thailand, Malaysia and the Philippines. U.S. will join these countries and have a delayed broadcast one week later.

With recent additions, the participating theaters stand at: