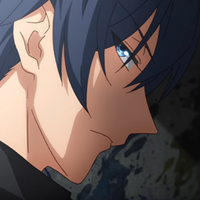 Kenka Bancho Otome -Girl Beats Boys-, the anime adaptation of the visual novel spinoff of the beat-'em-up series Kenka Bancho, is slowly building up its harem in advance of the anime's premiere. In the latest PV, we meet Rintarou Kira, the "Lone Wolf" Delinquent:

From his bio on Otome-Jikan:

It is said that his abilities and strength are number one among the second year delinquents. But this is just noise from the people around him and the person himself is unconcerned about competing for the top. A taciturn boy who dislikes hanging out with people, he's always doing things alone.

As in the original VN, Rintarou is voiced by Yoshimasa Hosoya (Orga Itsuka, Gundam: Iron-Blooded Orphans). He's the latest character to be given his own PV, following Totomaru Minowa (voiced by KENN) and Takayuki Konparu (voiced by Shouta Aoi).