Panels and autograph sessions are among this weekend's highlights 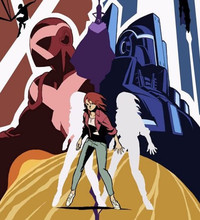 The Reflection is an original TV anime co-production mixing in the talents of Studio DEEN, comic legend Stan Lee, musician Trevor Horn, and director Hiroshi Nagahama (Mushi-Shi). Set in a world where people spontaneously develop superhuman powers, The Reflection Wave One is set to make its debut this July, but you'll be able to see director Nagahama at this weekend's Sakura-Con.

For those attending the convention, here's Nagahama's schedule:

Sakura-Con's description of Hiroshi Nagahama lists some of his favorite manga creators, which include the likes of Go Nagai and Kazuo Umezu. As for American comic creators, he's a fan of Jack Kirby, Mike Mignola, David Mazzucchelli, and Bill Sienkiewicz, among others.

Here's a teaser promo for The Reflection Wave One from March for those who missed it: