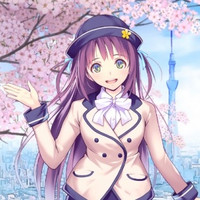 Tokyo-based digital content company Techno Art has launched an official website for "Tokyo Guide Girls," which is operated as part of Tokyo Prefecture's "&TOKYO" project to promote the Tokyo brand value both domestically and internationally for the upcoming Tokyo Olympic and Paralympic Games in 2020. Using the "&TOKYO" logo, the prefecture and private operators have worked together to transmit the city's appeal to the world.

Since May1, the "Tokyo Guide Girls" site has started holding an open illustration contest for its image girls representing the 23 Wards of Tokyo, except the Chiyoda-Ward girl Kanade Jinbo who has been already introduced on the site as the key character for the project. The 23 girls will be featured in the upcoming official sightseeing guidebook for Tokyo, as well as on the internet media and merchandise. The first contest for the Shibuya and Shinagawa girls now opens for submissions and its selection result will be announced in August. The second contest for the Taito, Kita, and Arakawa Ward girls is

scheduled to open in June. The first prize winners will receive a reward of 100,000 yen.