"I drew them by myself to get my living and amusement expenses." 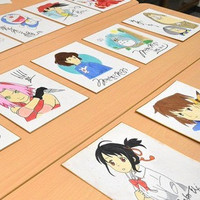 Okayama Prefectural Police announced on May 10 that they arrested a 32-year-old unemployed man from Hino-city, Tokyo, for selling fake autographed colored papers of famous Japanese anime/manga creators including Hayao Miyazaki (My Neighbor Totoro) and Makoto Shinkai (Your Name.) on internet auction sites.

On September 20, 2016, answering a question from a fan, Shinkai confirmed that the autographed paper put up for an internet auction was fake.

According to the police investigation, the suspect put up fake autographed colored papers of Miyazaki

and Shinkai for online auction between October and November of last year, then sold the Miyazaki paper

Okayama Prefecture for 17,000 yen. He has already admitted the charge and said, "I drew them by

myself to get my living and amusement expenses."

been put up with his ID on auction sites. Okayama Prefectural Police established the Anti-Cyber Crime

Section this spring to investigate various internet crimes, and this is the section's first arrest case.

Other fake autographed papers confirmed in the photo provided by Mainichi Shimbun are: