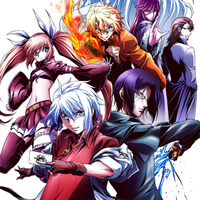 Funimation has announced that Chronos Ruler (known as Jikan no Shihaisha in Japan) will be joining their summer 2017 SimulDub line-up. TV anime based on the digital manga by PONJEA about super-powered guardians protecting the time-line from interference by misguided humans and time-devouring demons will debut its English audio version August 2nd.

There's a new addition to our SimulDub line-up: Chronos Ruler!