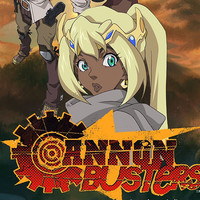 Last year, crowdfunding helped development of a pilot for Cannon Busters: The Animated Series, the project from Producer and Director LeSean Thomas, whose work has been seen on The Boondocks, The Legend of Korra (Book 1) and Black Dynamite: The Animated Series, produced at anime studio Satelight Inc (Macross Frontier, Log Horizon, Basquash!). Netflix has now announced that they have picked up the series for a 12-episode run.

They describe the project:

Created, directed and executive produced by LeSean Thomas (Children of Ether), the series follows the adventures and exploits of S.A.M, a high-end, royal-class friendship droid who’s joined by a quirky, discarded maintenance robot and a brash, deadly fugitive. Together, the unlikely trio embarks on an unforgettable journey in a fantastic and dangerous world in search of S.A.M’s best friend, the heir to a powerful kingdom under siege. Twelve episodes are being produced by Manga Entertainment Ltd, Nada Holdings and Satelight (Macross Delta).