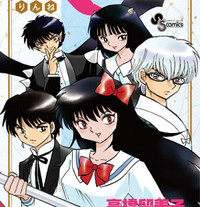 Volume 39 of Rumiko Takahashi's 2009 Rin-ne was released in Japan last week, and that makes it comparable to the span of some of the legendary author's other long works (Urusei Yatsura was 34, Ranma 1/2 was 38 - Inu Yasha was a marathon 56). It looks like that's about it for the current supernatural rom-com. A preview of Weekly Shōnen Sunday has the series ending in three chapters.

Kyoukai no RINNE by Rumiko Takahshi will end in 3 chapters --so if there are no breaks, in issue #5. pic.twitter.com/cjOKNu9udW