"Go with the Clouds, North by Northwest" manga and "Sherlock Holmes" novel also on the way 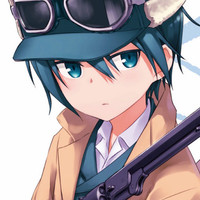 Vertical Comics had a handful of announcements to make at this weekend's Anime Central, including its license of Iruka Shiomiya's manga adaptation of Keiichi Sigsawa's Kino's Journey light novels. The series should start coming out in English next summer.

"The world is not beautiful, therefore it is." A story about Kino, who travels around the world with nothing but guns for protection and the talking motorcycle Hermes. Kino travels to many mystical worlds, each with its unique customs and people, and learns about the world through their stories, at times conjuring humor and inspiration or other times piercing cynicism. However, Kino's own custom is to stay no longer than three days in every town without exception, as it is enough time to learn almost everything important about the place while still leaving time to explore new lands.

Among the other license announcements are Aki Irie's Go with the Clouds, North by Northwest, an Iceland-based mystery manga that's scheduled to come out in May 2019. The story centers on a 17-year-old's search for someone… oh, and he's also a detective with a talking car who's weak around women.

Vertical will also be releasing Keisuke Matsuoka's Sherlock Holmes and Hirodumi Ito novel next March, followed by omnibus collections of Tsutomu Nihei's Blame! and Knights of Sidonia Master's Edition in April. The Knights of Sidonia collections will have about three and a half volumes in each, adding up to seven omnibus volumes.