Kouji Shiraishi (Sadako vs. Kayako) takes the director's chair for a fall 2019 release 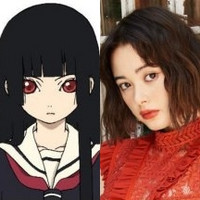 Tamashiro was born to an American father and a Japanese mother in Okinawa in October 1997. After winning Kodansha's "Miss iD2013 Grand Prix" in July 2012, she has been working as a professional fashion model. Meanwhile, she has also starring several films based on popular shoujo manga, such as Wolf Girl and Black Prince (2016), P and JK (2017), Sagrada Reset (2017), and the most recent Missions of Love (2018).

45-year-old Kouji Shiraishi is attached to write and direct. He is best known for his internationally

second time for Tamashiro and Shiraishi to team up since Sadako vs. Kayako, in which the actress played

one of the main heroines, Suzuka Takagi.

The live-action film Hell Girl is set to be released in Japan in the fall of 2019.