He has been working on the postponed "Evangelion: 3.0+1.0 Thrice Upon a Time" 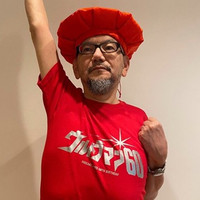 The official Twitter accounts for Studio Khara and his wife Moyoko Anno posted photos of Hideaki Anno wearing a red hood and a T-shirt with the logo of "Ultraman 60" (a parody of Tsuburaya Production's tokusatsu series Ultraman 80) to celebrate his Kanreki / 60th birthday. The internationally acclaimed anime director was born on May 22, 1960.

In Japan, Kanreki is celebrated by wearing red clothes, such as cape and vest. According to his wife's tweet, the hood and the T-shirt were presented by volunteers at Khara. He says in the post, "I'll do my best in my 60s."

Anno has been working on Evangelion: 3.0+1.0 Thrice Upon a Time, which was originally scheduled to be released in Japan on June 27, 2020, but has been delayed due to the COVID-19 outbreak like many other films. After the film is completed, he is scheduled to join the production of Shin Ultraman directed by Shinji Higuchi.