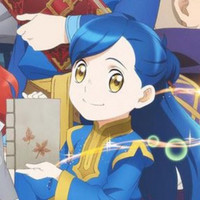 The OVA (episode 14.5 part 1 and part 2) will be available a week before that on Saturday, June 13. All of the new dubbed episodes were safely produced and recorded with a remote cast and crew.

Speaking of which, here's the Ascendance of a Bookworm dub cast:

Ascendance of a Bookworm follows the life of college student and aspiring librarian Motosu Urano who is transported to another world after an unfortunate accident. When she is reborn as Main, the daughter of a poor soldier, she makes it her mission to make books more freely available to everyone in this new world.