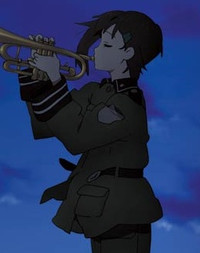 GRIMES, Iowa, May 18, 2011 – Anime producer and distributor Right Stuf, Inc. and its Nozomi Entertainment division are pleased to announce the grand opening of soundofthesky.rightstuf.com (http://soundofthesky.rightstuf.com ), the official series site for SOUND OF THE SKY (Sora no Woto), which is scheduled to be released as a limited-edition DVD box set in July 2011.


* For mobile and smart phone versions of the site, scroll to the bottom of the site’s home page or access it directly via http://soundofthesky.rightstuf.com/m/

The SOUND OF THE SKY (Sora no Woto) Complete DVD Collection L.E. will be available on July 5, 2011. This limited-edition DVD box set will feature all 12 episodes of Sound of the Sky – plus two special episodes – with Japanese audio, English subtitles and English on-screen translations. Additionally, the set will be housed in a collectors’ art box and include a 40-page book with series artwork and staff commentaries.

Only a limited quantity of this premium set will be produced.

** While supplies last, fans who pre-order the Sound of the Sky Complete DVD Collection L.E. from RightStuf.com will also receive an exclusive postcard set featuring illustrations from the series.

“great animation and a sense of presence and atmosphere…
an almost theatrical feeling with its pacing and attention to detail”
– Chris Beveridge, AnimeOnDVD at Mania.com

Also known by the title “Sora no Woto,” Sound of the Sky aired on TV Tokyo and via Internet simulcast in early 2010. It was the first series produced as part of the “Anime no Chikara” program, a joint initiative by TV Tokyo and Aniplex to develop original animated content for television.

The series is based on an original concept by Paradores and features direction by Mamoru Kanbe (Elfin Lied, Letter Bee: Light and Blue Night Fantasy), series composition and scripting by Hiroyuki Yoshino (Macross Frontier, My-Otome) and animation by A-1 Pictures (Black Butler, Fractale). Sound of the Sky’s opening theme is composed by Yuki Kajiura (Noir, .hack//SIGN) and performed by Kalafina (Black Butler).

Visit soundofthesky.rightstuf.com to find out more about the series and to pre-order the SOUND OF THE SKY Complete DVD Collection L.E.

About SOUND OF THE SKY (Sora no Woto)


In a lonely corner of the world, on the edge of No Man’s Land, sits Clocktower Fortress. It’s home to the 1121st Platoon of the Helvetian Army, and their newest member is a 15-year-old volunteer named Kanata Sorami, who enlisted to learn how to play the bugle. When she was a child, Kanata was saved by a beautiful soldier and found inspiration in the clear, golden sound of her trumpet. From that day forward, Kanata decided music would be her life. As the other platoon members train her how to be a bugler and a soldier, Kanata's enduring optimism will inspire them to look for happiness and beauty, even in a world haunted by war. Contains episodes 1-12, plus two special episodes!

* Cover Art: http://outgoing.rightstuf.com/sleeves/rsdvd1144.jpg
SOUND OF THE SKY: Sora no Woto (SO●RA●NO●WO●TO) © Paradores/Aniplex/1121
* To view this image, cut and paste the URL into your Web browser.

** Product specifications and content may be subject to change.

ABOUT RIGHT STUF, INC.
Currently celebrating its 23rd year in business, Right Stuf, Inc. was one of the first players in the U.S. Japanese Animation ("anime") industry, as both an anime producer/distributor and a retailer. Right Stuf works to promote knowledge of its own products, as well as the anime and manga industry, in general, through its online storefront at RightStuf.com and a variety of media including podcasts and special publications.

Nozomi Entertainment, Right Stuf’s production division, is dedicated to the highest quality releases. True to the Japanese word that inspired its name, Nozomi’s focus is on “what fans want.” By focusing on a limited number of anime properties each year, the Nozomi production team ensures each release receives the care and attention to detail it deserves.

From anime classics like Astro Boy, Kimba and Gigantor to modern comedies, dramas and favorites such as The Irresponsible Captain Tylor, His and Her Circumstances, Gravitation, Ninja Nonsense, The Third: The Girl With the Blue Eye, Emma: A Victorian Romance, Maria Watches Over Us, ARIA, Gakuen Alice,Rental Magica, Dirty Pair and Junjo Romantica, Right Stuf and Nozomi Entertainment produce quality programming for fans of all ages and interests. For more information, visit www.rightstuf.com and www.nozomient.com.