Natsume's "simple life" simulator lives up to its name, building on an already-solid formula 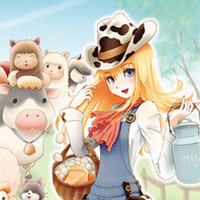 I spend way too much time killing dudes in video games. Honestly, I get kinda tired of that, so that's where games like Harvest Moon come in. Natsume's farming simulator has been a surprisingly popular staple ever since the original hit the SNES in '97, Harvest Moon has bounced around most major consoles before mostly settling (appropriately) on handhelds. The newest addition, the 3DS-exclusive Harvest Moon: A New Beginning, thankfully doesn't fix what isn't broken, while giving plenty of options to make this game feel more yours than any other entry in the series.

Just about every Harvest Moon is set up the same way--for some reason or another, you're given a run-down farm by a relative or family friend, and now it's your job to revitalize the farm. A New Beginning extends this goal to the whole town--Echo Village was once a bustling farm community, but a massive economic downturn has sent most of the residents packing. Your cheapskate incredibly generous parents give you their dump abandoned farm as a coming-of-age present, and now you're tasked with single-handedly making Echo Village thrive again. 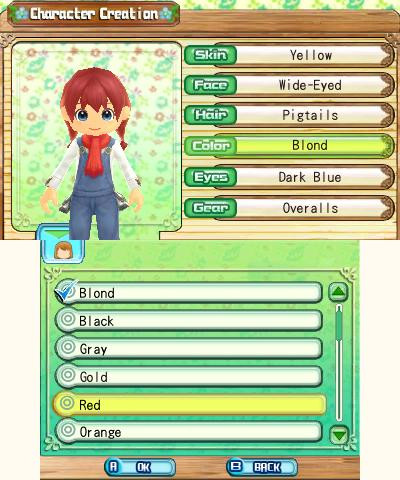 When you start out, you get to completely customize your character (a first for the series)--while the game naturally doesn't get into Saint's Row levels of customization, there are still plenty of options to make your farmer or farmerette stand out, and you're able to later change your outfit and hair--then set out on saving Echo Village through the power of good old-fashioned hard work. Don't laugh--this is just as impossible a task as hunting down the treasure of Shambhala or stealthily saving the world from nuclear annihilation. The town isn't going to rebuild itself. 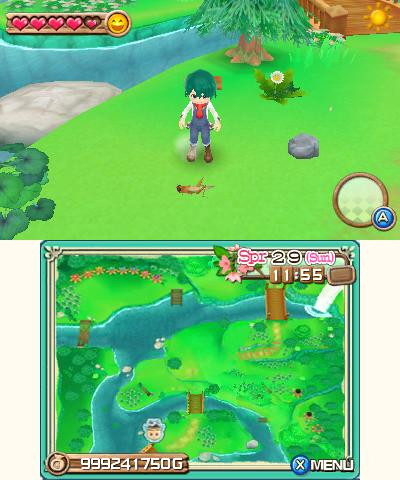 Starting out, you're not able to do much--you can fish or scour the woods for bugs and other items, farm on your very small plot of land, or chat with the villagers. Usually, a lengthy introductory sequence like this tends to drag on, but A New Beginning somehow knows just the right time players need to get comfortable with the controls, understand the rules of the game, and then move players on to more advanced tasks. 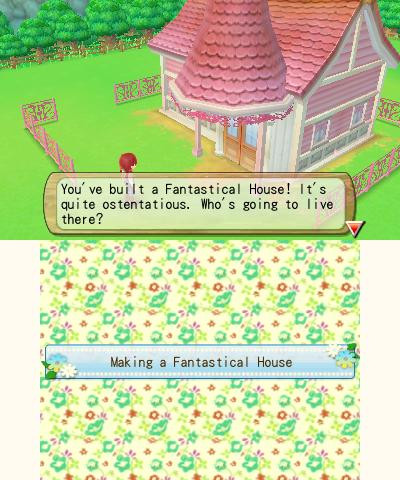 Even with its adorable exterior, money rules all in Echo Village--the crops you raise, the dishes you cook, the animal products you collect like milk and eggs, the fish you catch, and the honey you collect from the new beehives all get sold toward maintaining your farm and paying the town architect (after she moves in) for blueprints that go toward completing your Town Renovation Projects. In another surprising turn of customization, you're able to completely redesign Echo Village just the way you like.

If you feel like stepping out into the world and meeting other players, A New Beginning has a multiplayer component (using both Friend Codes and randomly dumping you into players' rooms) that lets you collect products from players' animals, including milk and wool. You'll also make tons of money by regularly playing multiplayer and selling the goodies you get from it. You can also trade "gift" items at the beginning, but so far players are pretty chintsy--don't expect much more than some milk or soil. Soil. The stuff is free in the shop, and they give it to you in multiplayer as their "gift." Thanks. 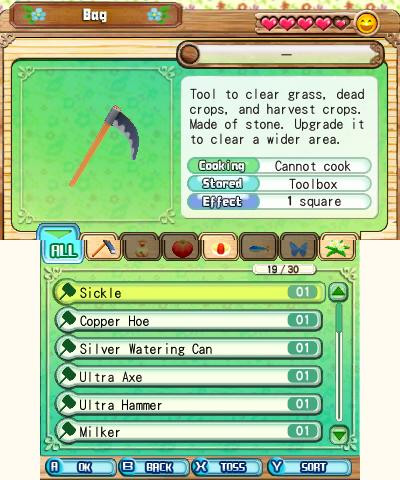 Of course, it all comes back to your village, and making enough money to rebuild Echo Village. You'll have to take care of your animals (which can die or get fat if you don't take care of them well enough), constantly keep your farm and town in top shape, and stay on good terms with everyone in the village if you want to succeed. Even with a fairly large inventory and plenty of items with only one use, the controls are quick and intuitive, making "chores" pass by quickly. There's only so much you can do each day, so trying to set up a routine that gets as much done as possible in the time you have with your available stamina is key. You're not hamstrung on stamina, either--you can get plenty done and you can eat food to regain stamina, but the real challenge is choosing what to do in the time you have. All that I've described up to now sounds pretty simple, but hardcore Harvest Moon players have this down to a science. 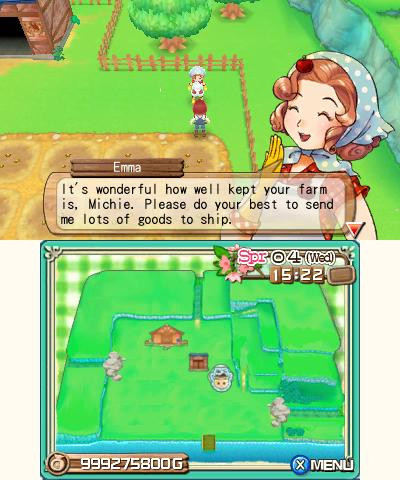 The people of Echo Village are pretty critical, no matter how hard you try to be friends with them. Gaining Friendship Points is a major part of every Harvest Moon, and you can stay on good terms with villagers if you talk to them regularly and give them gifts. You can usually find people wandering around town or in their homes, but it can get frustrating when you're trying to talk to someone or give them a gift and they're eating. No, really--townsfolk eat three two-hour meals a day, and they refuse to accept gifts during that time. I don't know what kind of psychopath eats a two-hour long breakfast and doesn't accept gifts while eating--who wouldn't love to receive a bag of dirt in the middle of their Denver omelet? In addition, the normally-seamless controls gum up during gift-giving--you have to select an item in your inventory, hold it, and then present it to them (often while they're running around) with the A button--the same button to otherwise throw it on the ground.

If there's enough time for love in your life, you can woo a bachelor or bachelorette, marry them, and have a baby just like every other Harvest Moon. For the record, there is no 3D touchscreen-based "birds and the bees" minigame. Aside from rebuilding the town and marriage, there's plenty more to do, including mining, crafting, travelling, exploring the woods (you unlock areas of the woods by finding sheet music) and participating in seasonal festivals (where victory means more money for your farm and the town). A personal recommendation: hoard like a mofo. Save all the crap you find out in the woods, keep all the building materials you find, and only sell bugs and fish. I guarantee it'll eventually come in handy. 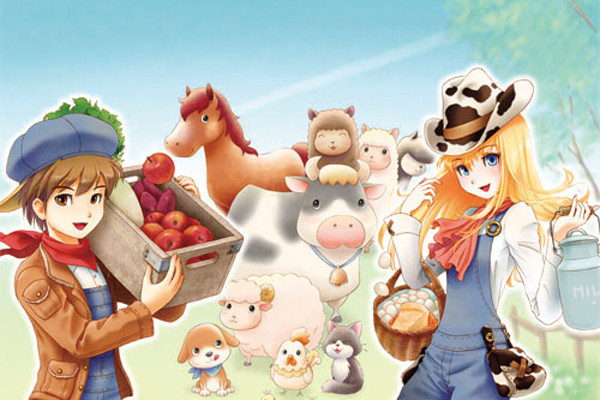 Natsume puts out pretty complete games--Harvest Moon: A New Beginning is well-made, does what it sets out to do, and provides an unsually hardcore challenge for an otherwise relaxing game. Other than the wonky gifting controls, the only real complaint I have is with the pretty-much-forgettable soundtrack. This game definitely isn't for everybody, but Harvest Moon: A New Beginning is a solid sim that shows video game farming at its best. Sometimes, a change of pace is nice.

+ Doesn't fix what isn't broken, and instead only makes slight improvements to an already good formula

+/- Only slightly-improved graphics and "more of the same" art are great for longtime fans, but won't win over any newcomers

+/- Incredibly relaxing gameplay and atmosphere bring something different to your gaming library, but it's not for everybody