The one who brought Meguca her suffering 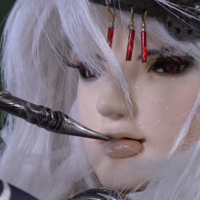 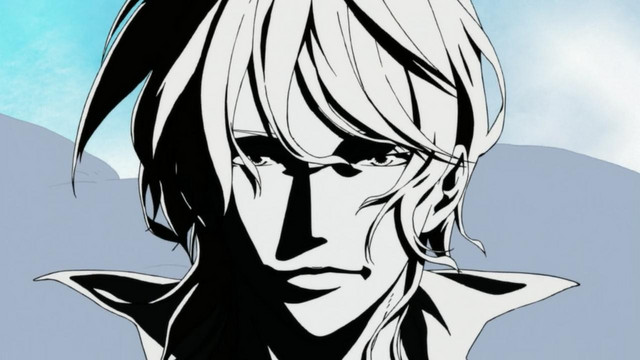 There was a city that purged its citizens of emotions in the aftermath of a great disaster. Many years later, an enforcer of justice stalks the streets with his partner and eliminates those who defy society's rules. But after he encounters a man reading classic literature, his outlook on life changes completely. Can he overcome the cruel, oppressive world in which he lives?

If you’re an anime fan, you’re probably thinking: “Oh, I love PSYCHO-PASS!” But this was Equilibrium, a 2002 box office flop starring Christian Bale just a few years before his star turn in Batman Begins. The film received middling critical reviews, but clearly someone had their eye on it. Just one year later, a scriptwriter at the then up and coming visual novel studio Nitro+ co-produced an unofficial sequel to the movie: Jouka no Monshou.  Only a few hours long, it expanded on the themes and worldbuilding of the original film, particularly fleshing out its infamous, fictional martial arts style of “gun kata.” 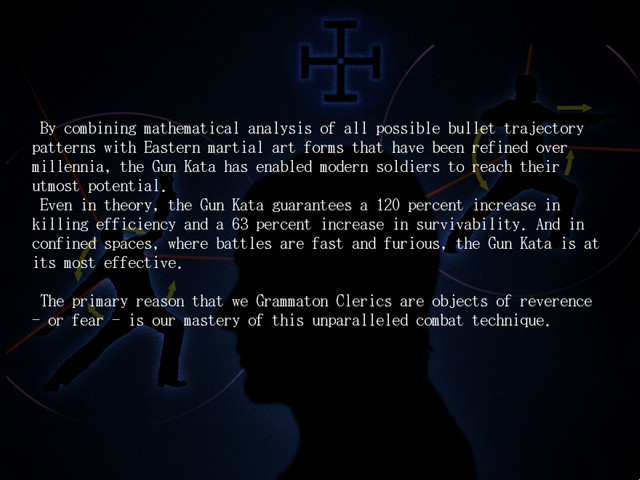 That December, in 2003, Nitro+ released the visual novel Song of Saya. Advertised as a charming college romance, it was instead a gruesome and disturbing horror tale that took influence from the stories of H.P. Lovecraft and video nasties like Possession. And the man who wrote the script? The writer of Jouka no Monshou, our friend and birthday boy Gen Urobuchi. Less than a decade later, with a successful light novel prequel to Fate/Stay Night under his belt, he was brought on to write 2011’s late night smash hit Puella Magi Madoka Magica and became one of the most famous scriptwriters in the anime industry.

Standing out as an anime scriptwriter is no mean feat. The medium is so collaborative that directors, producers and animators often have just as much say as the person who’s been designated for “scenario writing” or “series composition.” Of the handful of writers who have managed to make a name for themselves outside of the creative staff they associate with, perhaps only Gen Urobuchi and Mari Okada have made a mark for themselves this decade as figures so singular that they’ve been given the keys to direct work of their own. 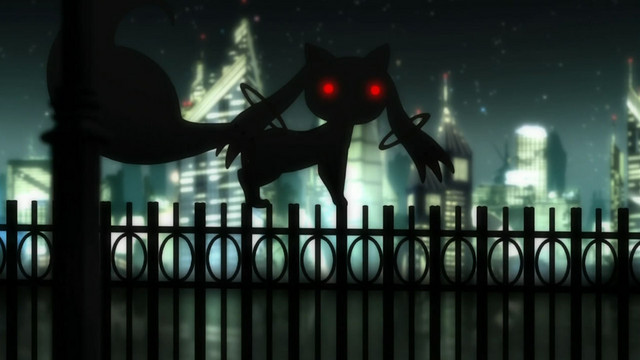 If Mari Okada’s brand is melodrama, creating plots where characters overcome societal expectations to loudly express their feelings, many have claimed Urobuchi’s specialty is “tragedy.” His stories are full of great men laid low, young women whose innocence is shattered, decent people transformed through hardship into depraved monsters. Vicious worlds governed by amoral gods, where the strong prey upon the weak and those who are not strong must struggle to survive.

Those who love his work compare him to Dostoyevsky, or to classic Greek tragedy. Others despise his sometimes schlocky violence, frequent reliance on the same character archetypes, and—most of all—the number of women in his work who end up strangled to death, among other horrible fates. 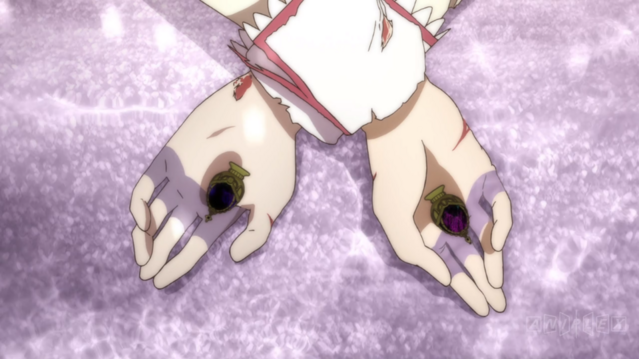 But I brought up Jouka no Monshou and Song of Saya earlier in this piece  to reclaim Urobuchi’s career: not as a writer of tragedies, but a writer of pulps. Urobuchi is not an original writer. By his own admission, his work borrows heavily from others. Madoka leans heavily on past, meaner seasons of Kamen Rider and the cosmic horror of H.P. Lovecraft. Fate/Zero greatly expands the universe of Fate/Stay Night, but many of its cruelest twists are extrapolated straight from the latter routes of the original game. PSYCHO-PASS in particular features just about everything Urobuchi enjoys writing about: a dystopian city right out of Equilibrium, freaky body horror involving brains in jars and shocking murders, and a battle of wits between a conflicted agent of the law and an amoral criminal mastermind.

Urobuchi’s great skill at a writer is taking these complex plots built of recognizable parts, and then streamlining them into vicious and efficient suspense machines that surprise even when you know what horrors are coming. The big reveal of Song of Saya—that the little girl the main character befriends is really something horrible and other—is brought out again and again in his later stories, from the secret origin of the squid aliens in Gargantia on the Verdurous Planet to the symbolic fruit trees in Kamen Rider Gaim. Nearly every time, it works like gangbusters. Maybe it’s that Urobuchi is always careful to give us at least one character who is in on the take, bending society around them to fulfill their dreams. The assassins, obsessives and professionals, the ones who cut through the universe like butter and know exactly what kind of story they are in. When Kiritsugu obliterates an opponent in the Holy Grail War with a dirty trick, we nod along because in that situation we would have done the same thing. But then Kiritsugu is laid low, and we are shocked. If Kiritsugu knew the axe hanging over his head, and was still crushed when it fell, couldn’t the same happen to us? 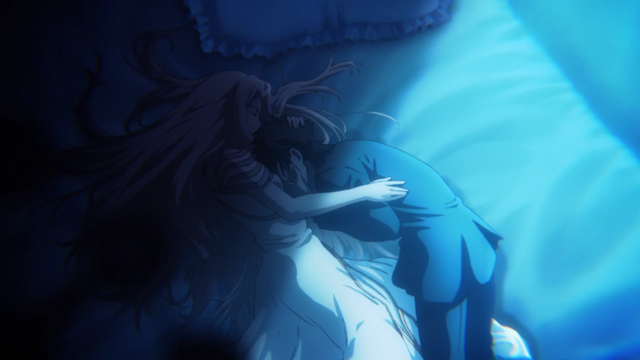 My favorite recent work by Gen Urobuchi is the first season of Thunderbolt Fantasy, which represents everything I find appealing about his creations. First, it’s a labor of love, spotlighting a puppet troupe that is hugely popular in Taiwan but unknown elsewhere. Second, it’s a classic story of good versus evil that trims away many of Urobuchi’s excesses while remaining distinctive and flavorful; the puppets suffer extreme bodily harm up to and including decapitation, but there’s a refreshing lack of sexual or sadomasochistic violence. Third, despite being a wuxia story where powerful martial artists beat the tar out of each other, success is determined by trickery and guile.

The most dangerous force in the story is not the memorably named Screaming Phoenix Killer, or the ruthless Mie Tian Hai. It’s the thief Lin Xue Ya, who despite being the most talented swordsman alive would rather lie and cheat his way through life, humiliating people who think they have the world figured out. After all, it’s far more entertaining that way! 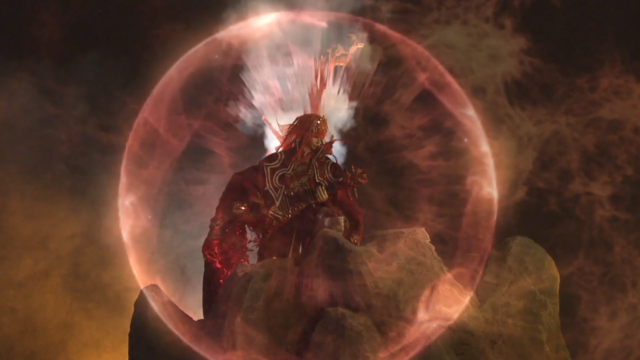 But Lin Xue Ya makes a serious mistake at the end of Thunderbolt Fantasy, putting the fate of the world at risk and endangering his life of fun and amusement. It’s ultimately the wandering monk Shang Bu Huan, a truly decent human being, who saves the day. Just like Madoka saved Homura from succumbing to despair, or how Akane surpasses even Kogami as the greatest threat to the Sybil System. Urobuchi caters to the bloodthirst of his fans, throwing them for a loop again and again. But at the end he’ll give us a hero. Thank you Gen Urobuchi, and happy birthday!

Are you a fan of Gen Urobuchi? Are you looking forward to his most recent project? Let us know in the comments!

Adam W is a Features Writer at Crunchyroll. He sporadically contributes with a loose coalition of friends to a blog called Isn't it Electrifying? Did you know that Gen Urobuchi, Kinoko Nasu, Romeo Tanaka and Hoshizora Meteo are all friends? The more you know. You can find Adam at: @wendeego