INTERVIEW: How the Composer of Liz and the Blue Bird Used Math Equations to Write a Soundtrack

Kensuke Ushio, the composer for Liz and the Blue Bird, shares his creative process. 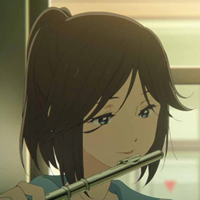 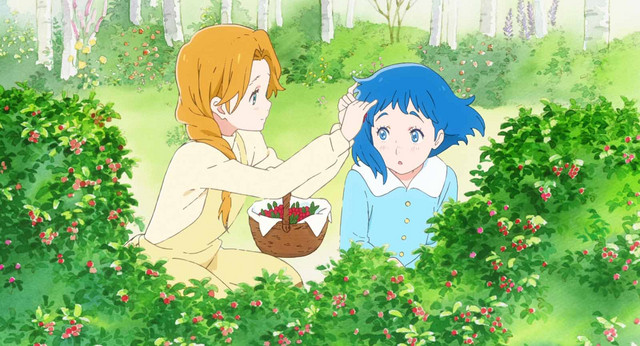 This interview was originally published by Ricky Soberano on November 7, 2018

Liz and the Blue Bird is not a typical anime spin-off film. An off-shoot of Sound! Euphonium, the film offers a different aesthetic, different tone, even a different set of protagonists than the main series. Liz explores the intimate and delicate inner worlds of two girls, Mizore and Nozomi, who were secondary characters in Euphonium. The world of this film is one built with small gestures, the sounds that fill an empty room, and, of course, a lovingly crafted soundtrack. This wasn't composer Kensuke Ushio's first time collaborating with director Naoko Yamada–the two worked together on A Silent Voice two years prior–and the connection between the two creators is electric. Soundtracks are commonly associated with the word "accompaniment," something that supplements rather than complements the rest of a work, but Ushio was involved with Liz in a much deeper way, down to shaping the very themes of the film with Yamada.

Ushio's score makes prominent use of the piano, but as you listen other sounds come to the forefront — shoes upon pavement, hands striking the top of a desk, the clinking of science classroom beakers–through these sounds an entire world blooms around us. Visuals and narrative can only show us what happens in specific segments of time, but the use of these everyday sounds pulls us into the world. It's easier to feel what it's like to spend every day at Kitauji High School. Ushio's soundtrack and Yamada's film work together to weave a world of light and sound, a place that feels at once real yet too delicate to ever enter. At Anime Expo 2018, I had the privilege of meeting and talking with Ushio about his work on Liz and the Blue Bird. 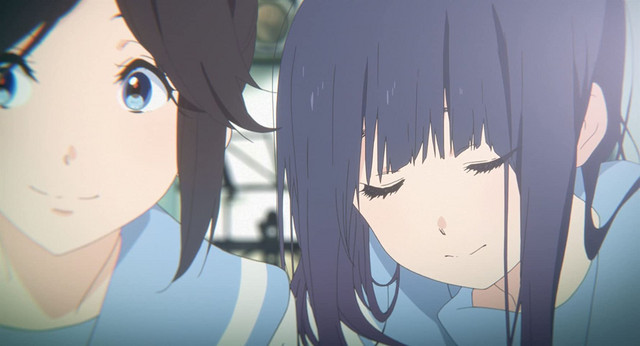 Liz and The Blue Bird marks your second collaboration with director Naoko Yamada. Could you explain how your working relationship began?

So I was doing solo work in Japan and Yamada just happened to hear my music. She became a fan. She reached out to me to collaborate together.

Were you a fan of Yamada-san’s work before as well?

For whatever it's worth, here's Naoko Yamada posing with Kensuke Ushio, composer of Koe no Katachi. pic.twitter.com/9oQQZqt0oR

I’ve read that you were closely involved from the very beginning with forming the core themes of Liz and the Blue Bird which is a bit unusual for a composer of anime. Could you describe the level of involvement you had in the planning of the film with Ms. Yamada?

We discussed things before the storyboards or even the music was made so we had that talk about core themes as opposed to other composers. They would normally add the music towards the beginning of the production. Myself and Yamada-san, we discussed and planned everything out before we went into producing both the storyboards and composing the music. I loved creating a core concept. 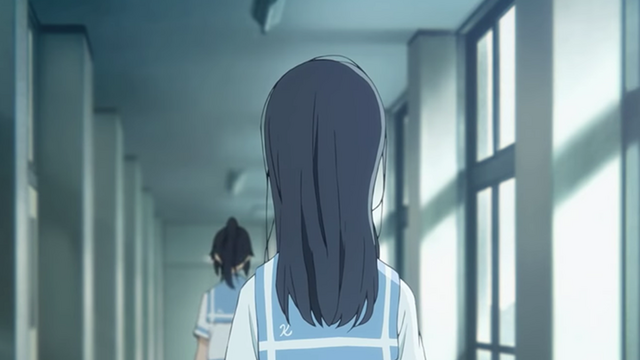 Could you talk a little bit more about the themes of disjoint and coprime?

So one of the core themes for the movie’s sound was a story about two girls who are together at first but slowly drift apart as things go along so we’d like to address how that happens and what leads to it.

The way that the idea of coprime works is that you have two series that starts with an integer — for example, four and five. They’re very close at first but as you go further along in the series, they get farther and farther away. That’s one of the reasons we thought the idea of coprime would fit into the context of the story itself.

From the sound of footsteps being used as percussion in a song to the noise of classroom objects folding into the background music, ambient sound plays a special role in this film. How did you capture all of these noises and what was your purpose in leaving them in every part of the film?

One of the things that we thought when applying all of this is that we didn’t want people to realize or understand the idea that these girls were slowly drifting apart from each other just because it’s such a sad occurrence. That was one of the core parts as well when we were planning out how to do and use the sound effects.

We also wanted to show that there was no one else around in the world. It was just those two girls. There wasn’t really anyone else to help or support or anything like that.

One of the main ideas that was always in my head while making the soundtrack was to use only the objects that they could actually see, such as in the tables and desks in the classroom, and the seats, even the beakers in the science rooms and all of that sort of stuff. We went to the actual school that the film is based on and we went around to all of the objects just to get all of the sounds and make it even more authentic.

For what it’s worth as a viewer, it really brought me into the world, the very small world of these characters. You and Yamada worked with sound director, Yôta Tsuruoka on A Silent Voice and are together again for this film. Could you explain Tsuruoka’s role and how he affected the sounds of Liz and the Blue Bird?

So for us, Tsuruoka is 20 or so years older than us. He is always someone we can rely on — someone that gives their all in that perspective — so for us personally his presence was something that allowed us to go ahead with what we needed to do and if anything came ever up, we could rely on him to help us out. He is a really, really great person. I love him. 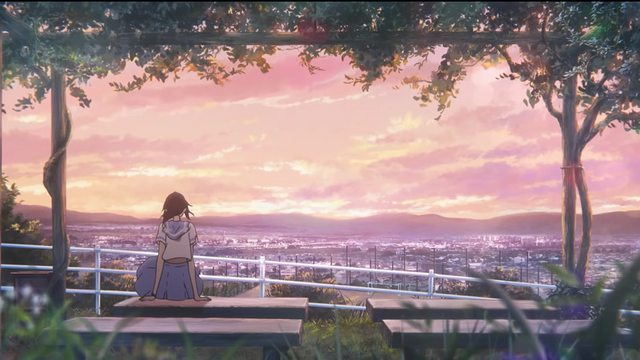 There are numerous times in Liz and the Blue Bird where the music and imagery invoke a nostalgic, difficult to describe sentiment. With such hard to describe abstract feelings, how did you and Yamada make sure that you were both on the same page for the emotional feelings of the movie?

So, the fact that we’re very close in age and grew up enjoying the same sort of music ... that helped us stay on the same wavelength during the projects. Our similarities just ensured that we were always really close in mindset. We can talk about over ten years of music that we both enjoy. It’s a really cool thing. I thought we united and bonded.

As for the soundtrack's sheet music itself, we made that through a process called decalcomania (note: an art technique where paint or ink is pressed into a folded paper to create symmetrical designs) which the way we’ve made that, is a way of representing how the two girls, that sort of disjoint between them and that gradual separation. We took that and used that as the base for the soundtrack as well so that’s one of the reasons why it ended up with such a nostalgic tone to it.

Some of the sheet music created using decalcomania.

Within the decalcomania you’ll see different objects represented by different colors, the beaker, the piano, the desk scraping sound. For example, the footsteps are synchronized to the music. The footsteps had an actual tempo. The tempo is 99, 100, 101. These are coprime numbers. The footsteps tempo is always a coprime number but also we slightly moved the tempo because we are humans and not robots, so we can't perfectly match it. So, at the very end of this film, you saw this lovely on-screen situation — I cannot remember the tone but for a second the footsteps are completely synced. Just the footsteps. This was so unexpected, even for me, hearing that the footsteps ended up in sync together. It felt like a genuine miracle that that happened. It was a joint moment. 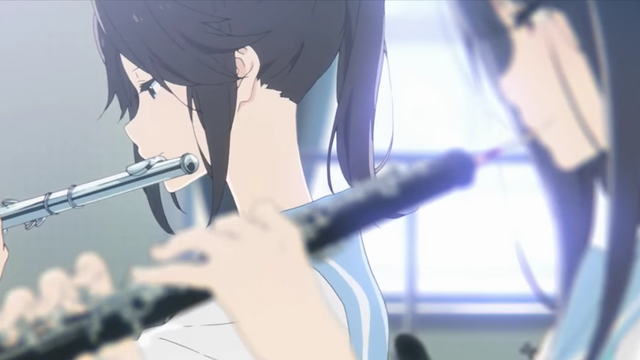 The disjoint becomes joined. I know that Liz and the Blue Bird just released recently but do you and Naoko Yamada have any plans to work together in the future?

Beautiful. One more thing: Do you have anything you’d like to say to the fans of you and Yamada’s work in the West?

The reason why I think Liz and the Blue Bird is entertaining is maybe because ... you’re crying. I think it’s a really nice story so I hope you like it.

After I saw this film, after the production was finished, I cried. But I cannot find the words to express myself. I wasn’t able to understand myself what I was feeling — sadness or despair — but at the same time, I did sort of understand what was being felt in the first place. I’m hoping fans abroad will be able to go through that same experience. Maybe realize something that they haven’t before. 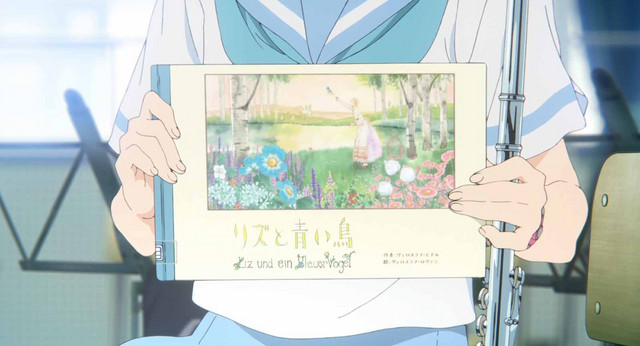