ESSAY: Loving Words Will Always Watch Over You: A Violet Evergarden Tribute 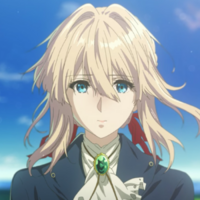 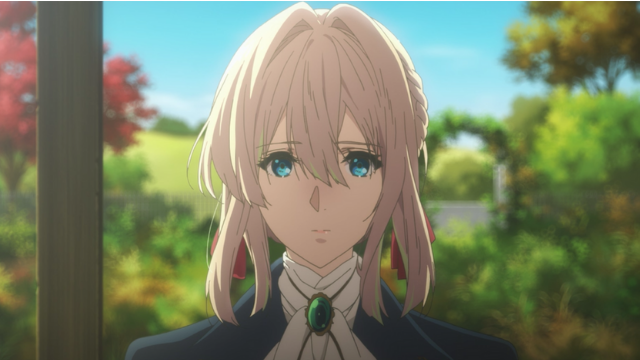 Violet Evergarden, like the best works of fiction, enwraps truthfulness with compassion. The beautiful 2018 Kyoto Animation series  — based on the light novel of the same name — boldly addresses the realities of loss and regret. But it pairs these sobering truths with a resoundingly powerful reminder of life's rich wonders, the possibility of reconciliation with one's awful past, and the recognition that love is always within reach. Time after time, Violet Evergarden tells us that life-empowering experiences can be generated through words and the healing art of writing. Let's explore how, and be warned, there are significant spoilers ahead.

Loss and the Creative Spirit 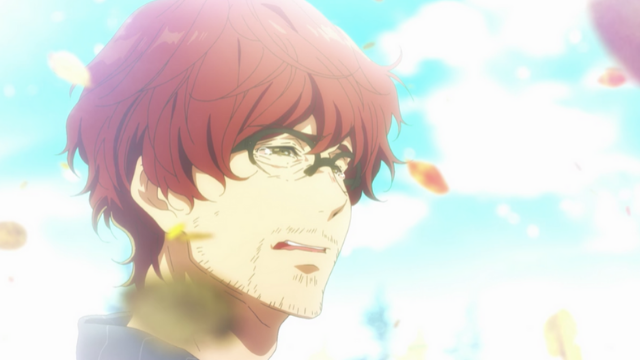 In Episode 7, Violet visits a famous playwright named Oscar Webster, to help him finish a new work Violet is an "Auto Memory Doll" — someone who assists others via writing. Oscar is an alcoholic, struggling to cope after losing not only his wife but also his daughter. Violet's presence reminds Oscar of his deceased child, which reaches its zenith the moment Violet "crosses the lake." Oscar sees this as a symbolic gesture that echoed his daughter's words. Violet's Auto Memory Doll service provides Oscar with the spark to write again, and his recovery and acceptance of loss are simultaneous with the completion of his new play. This is a compelling affirmation of the healing power of writing amidst tragedy. I found a lot of personal resonance with this episode, but not because I've experienced a loss as awful as Oscar's. I did, however, feel the very real threat of losing two people dear to me.

My dad suffered a heart attack while driving in the fall of 2018, which almost claimed his life. Five stents and one pacemaker later, he was okay. Unfortunately, things didn't get much easier for me and my family. My mom underwent surgery to remove the majority of her pancreas in Summer 2019, and the doctors discovered the presence of pancreatic cancer after the operation. I'm wildly fortunate that both my elderly parents are still alive today, and I can truly say that writing was one of the only things that comforted me during those 11 months. In that period, I somehow released an album and had the luxury of performing live semi-consistently for the first time in my life.

Lyrics have always been a top priority for me when writing songs, and I channeled a lot of what I experienced that year into those words. Singing what I wrote sustained me, and urged me to confront — rather than run from — the immense fear and sadness and anxiety. It helped me to face the possibility and the inevitability of the loss of my parents, but in a way that was nurturing and kept me from falling apart. That's how Episode 7 of Violet Evergarden reminded me, on a profoundly personal level, about the rejuvenating effects of creative writing. 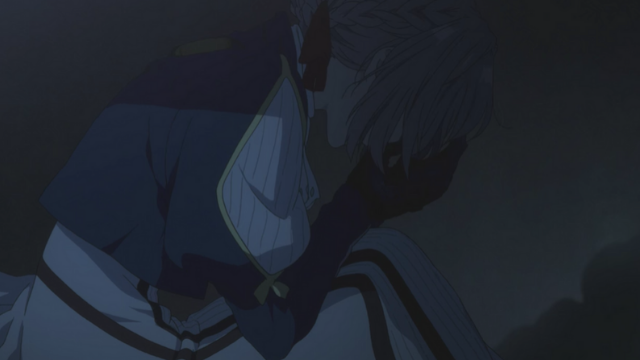 Regret is a theme that Violet Evergarden explores with a sobering focus on accepting responsibility, which the series pairs with a palpable sense of tenderness. The show uses Violet's bloodstained past as a skilled wartime killer to ask some heavy questions: Does an ex-killer have the right to one day live a peaceable life? Is it ever justifiable for someone who once did heinous things to continue living? Is self-forgiveness just a deluded, cheap attempt to get off easy for past sins? While the entire show tackles these questions, let's look at Episode 7 and 9, specifically.

Hodgins, a former military lieutenant-colonel who fought in the same war as Violet, tells her that one day she will wake up and find herself burning. Hodgins uses this metaphor to suggest to Violet that she will eventually be struck by the gravity of her past, a past stained with the blood of others. Violet eventually recognizes the truth in what Hodgins said and agonizes over whether or not she has the right to live. Hodgins tearfully tells Violet at the end of Episode 9 that although she can never erase the past, it is also true that everything she has done as an Auto Memory Doll will never be forgotten, either. While Hodgins says this, there's a brief montage that shows everyone Violet has helped by writing for them.

I love how this episode stressed the need to accept responsibility for past wrongs. It shows we can never change or alter what we've done. But the episode also poignantly argues that the good things we have done  — and can continue to do  — in support of others will also never be undone: actions, both good and bad, are permanent. It's a moving message about the need for accountability, but also the possibility of renewal and self-compassion. I also love that it is specifically the act of helping others through writing that gives Violet a new lease on life, that allows her to accept herself in spite of everything. Violet's character arc suggests writing can be a means to move away from a regrettable past toward a more selfless, healing path.

Words Worth Living For 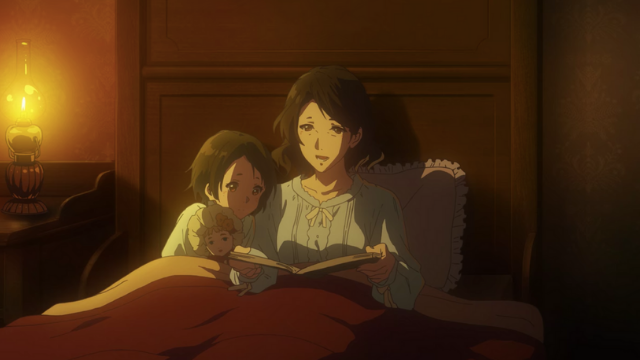 Episode 10 of Violet Evergarden absolutely destroyed me, and I can safely say that the episode made me bawl like a toddler unlike anything else in quite some time. Violet is tasked with helping a dying mother write letters to her daughter, Anne. By the end of the episode, we discover that the mother had Violet write letters for Anne to receive annually for 50 years, a gesture to help Anne cope with the death of her mother. There's a heart-melting segment where Anne receives new letters at future stages of life, gaining new strength and wisdom from her mother even after her death. At the episode's end, a fellow Auto Memory Doll named Cattleya reassures a mournful Violet that Anne will be okay because Violet's letters will reach her no matter where she is.

Both these scenes are a strong testament to the enduring and sustaining magic of words. In the absence of physical proximity and beyond the grave itself, words can still provide comfort and catharsis to those who live on. The episode reminded me of my own personal experience with literature and how my college years spent reading non-religious texts marked a positive shift for my connection to language. I grew up believing that non-religious books had no lasting importance in the grand scheme of things. This religious connection made me feel like the sacred world of language controlled me in every way, from the actions I should take to the thoughts I should have, to my eternal destiny itself.

College changed everything. I read my first novel in its entirety at age 20 and majored in English. Naturally, it's not like I personally knew any of the authors I read. I was separated from them for many reasons and in many ways, ranging from basic geographical distance to the mere fact that many were long deceased. But much like the letters Anne received from her mother who died, their words still moved and nourished me. They helped me see and articulate truths in myself that I was either too scared of expressing, or hadn't found the words for yet. They eased my fear of isolation and distance from others, giving me a means to access deeper, truer parts of myself. All those books gave me glimpses of actual freedom, a stark contrast to the soul-crushing visions of infinite hellfire from my religious days. 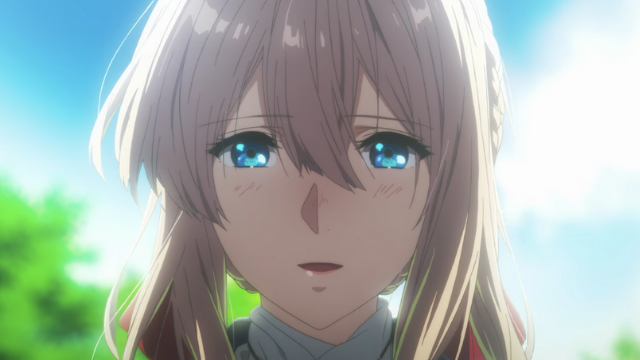 In an amazing essay called "The Artist's Struggle for Integrity," author James Baldwin writes that our suffering is only important insofar as we find a way to connect it with other people's pain. In a very real way, I think Violet Evergarden does that for viewers, by depicting the pain of its characters in a way that highlights newness and connection beyond individual experience. The last words we see in Episode 10 say "a loved one will always watch over you." These words carry a beacon of affection to all of us who were touched by this series, a show that helped us feel less lonely. Similar to the books that moved me so deeply, Violet Evergarden reminded me of the healing strength that language can produce.

What moved you about Violet Evergarden? Let me know below in the comments!