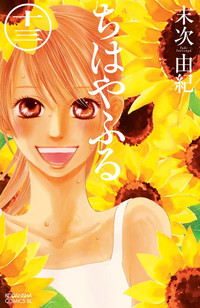 Originally announced to be getting a TV series in May, some of the staff for Yuki Suetsugu's award winning shoujo manga Chihayafuru have been announced. Madhouse will be in charge of animation production with Morio Asaka directing. He was also the director of NANA and Card Captor Sakura. Series composition will be by Naoya Takayama, who also worked on the Supernatural anime. The character designer will be Kunihiko Hamada, who previously was the character designer for NANA. Some character sketches are available on Comic Natalie. The series will take over Kaiji's timeslot on October 4th on NTV.

Chihayafuru is about Ayase Chihaya, who is drawn into the competitive world of the traditional Japanese card game karuta in elementary school by transfer student Wataya Arata. Arata aims to be a karuta title holder. Being separated after elementary school, Chihaya founds a club in high school with her childhood friend in the hope of being able to meet Arata again.