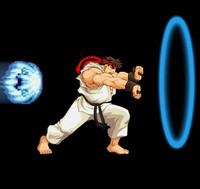 But y'know... something's missing from the game. Maybe if you added something recent to give it a little more character, a little more style. Something like... an Aperture Science Portal Gun?

Okay, Guile was always pretty strong, but he's starting to look a little overpowered. The Pixel Kingdom asks a very good question: what other games would benefit (or at least become a hell of a lot crazier) with the introduction of Portal's Aperture Science Handheld Portal Device?

via The Pixel Kingdom, headline image via Red Bubble (buy the shirt!)