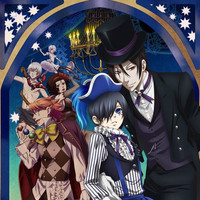 The anime adaptation of Yana Toboso's demonic servant manga Black Butler will next be featured as a TV series, subtitled "Book of Circus" and slated to run starting in July on the Animeism block, then an OVA, subtitled "Book of Murder," which will pre-screen in theaters Fall 2014.

Voice cast on the "Noah's Ark Circus" arc adaptation includes Mamoru Miyano as Joker, Takuma Terashima as Snake, Nobuhiko Okamoto as Dagger and Ayahi Takagaki as Doll. Sid does the new opening while AKIRA is on the ending.

Check out the latest "Circus" preview...