According to the tagline on the main visual, the second TV anime will be the final chapter of the "Kibougamine Gakuen" series 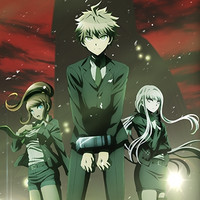 This week's 4.7 issue of Famitsu, out in Japan March 24th, is set to offer a feature on the upcoming Dangranronpa 3 anime and ahead of that, and the weekend's AnimeJapan event, the gaming magazine's site has posted an early look at the cast. Returning Kyoko Kirigi, Aoi Asahina, Yasuhiro Hagakure and Monokuma are joined by 12 new characters. 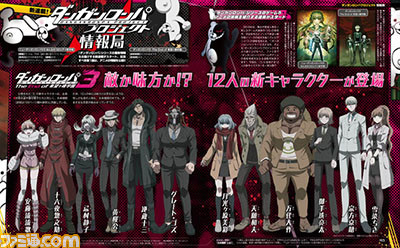 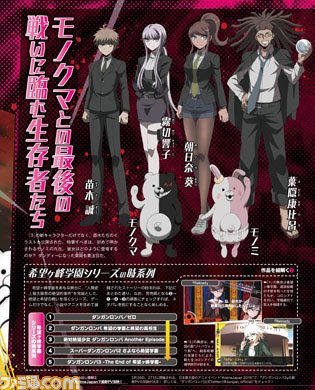 In December Spike Chunsoft confirmed that the TV anime series Danganronpa 3 -The End of Kibougamine Gakuen- was in the works for a 2016 premiere, along with a new PS4/PS Vita game New Dangangonpa V3: Minna no Koroshiai Shingakki (A New Semester for Everyone's Killing Life) for the same year.

Its first TV anime adaptation titled Danganronpa: The Animation produced by Lerche was aired for 13 episodes in Japan from July to September in 2013.