Next HM game will be playable at this year's E3 event 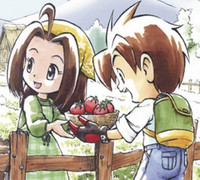 Yesterday Natsume announced Harvest Moon: Skytree Village for Nintendo 3DS, with plans to present the game in playable form at this year's E3 event. Skytree Village will be one of three games Natsume will have on hand at E3 2016, and while there's no release date yet, they did reveal a logo, synopsis, and a few gameplay details.

Introducing #HarvestMoon: Skytree Village, a new 3DS game that will be playable during @E3 2016! Watch for details~ pic.twitter.com/t5obc6XIMl

It's up to you revive the seven Skytrees in order to give the Harvest Goddess her power back, and, in turn, bring life back to this desolate land!

According to Harvest Moon producer Taka Maekawa, the team has been taking experience with the series and fan feedback into account when making the latest entry. Skytree Village will feature user-friendly tutorials, upgraded tools, a new Poitou donkey herd animal, and more.

More features from the press release:

• Play as a boy or a girl, woo bachelorettes and bachelors, and start a family!

• New crops and flowers to discover.

• A full town with many residents, each with their own personalities and quirks.

¡Given the Movie llegará a Crunchyroll en 2021!