"Yu-Gi-Oh! The Dark Side of Dimensions" Movie Sets Up International Theatrical Dates 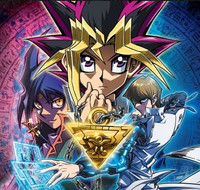 The Yu-Gi-Oh! The Dark Side of Dimensions anime film is coming to theaters in North America in January, and 4K Media expanded on plans with a handful of international dates. Some of the territories are locked in with specific openings, while others are still more general release windows, but you can see where regions outside of the United States and Canada fall below.

Territories and their respective distribution partners include:

In Yu-Gi-Oh! THE DARK SIDE OF DIMENSIONS, the stakes have never been higher; the rivalries never as fierce; the risks never so great. One wrong move—one card short—and it's game over for good. A decade in the making, Yu-Gi-Oh! THE DARK SIDE OF DIMENSIONS features new designs and an all-new story from the original creator of the global phenomenon, Kazuki Takahashi. His masterful tale features anime's most beloved characters in their long-awaited return: Yugi Muto, Seto Kaiba and their faithful friends Joey Wheeler, Tristan Taylor, Téa Gardner and Bakura. It's the most highly anticipated re-YU-nion ever!