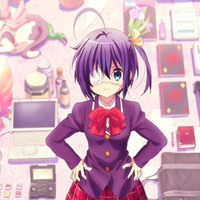 Sentai Filmworks had a slate of KyoAni movie licenses to announce at this weekend's Anime Boston convention. This included Love, Chunibyo & Other Delusions the Movie: Rikka Takanashi Revision, the 2013 movie released between the two seasons of anime, Tamako Love Story, the 2014 follow-up to 2013 TV anime Tamako Market and Beyond The Boundary I'll Be Here - Past and Future, the 2015 recap and follow-up to the 2014 TV anime.