A Fateful Reunion: The Return of the Mad Scientist Rintaro Okabe!

A familiar face convinces Rintaro to don his labcoat once again 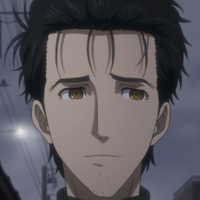 I've previously discussed how Okabe has experienced a dramatic change of character in Steins;Gate 0 and, as the show has progressed, Okabe has attempted to treat his emotional wounds with the false solace he finds in his interaction with the Amadeus AI. Unfortunately, that will never be enough to give him the push he needs to return to his old self. With Amadeus going missing and Okabe forced to undergo the Reading Steiner phenomena, he has come face-to-face with the one person who might give him that push he needs.

In an expanded version of one of the more prominent scenes from the game, the end of episode 7 and episode 8 of Steins;Gate 0 sends Okabe back to the Alpha world line. This is of course the world line that Okabe spent most of Steins;Gate in and also the one where Mayuri is dead. However, that also means this is the world line where Kurisu Makise is alive, which Okabe learns immediately when he sees her in the Future Gadget lab. It’s a startling revelation for Okabe. Here is the person he loves, alive and well, but will that make him want to forsake everything he’s worked for to save Mayuri and stay here? 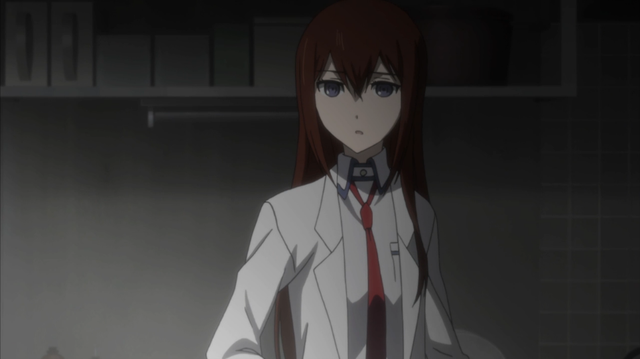 There’s a possibility that with the mental state Okabe was in at the beginning of Steins;Gate 0, that version of him might have wanted to settle and stay. Yet, as the story has progressed, parts of the old Okabe have started to come back. It might be easy to point specifically to one thing, like helping Suzuha and Daru find Kagari or confronting Tennouji about his Rounders activity and also asking for his help as one of the ways he’s starting to come back, but it’s more than that. Constantly being around people that he knows and that care about him is certainly a big proponent of healing. Ever since the beginning of Steins;Gate 0, he’s reunited with everyone, along with new faces Maho and Professor Leskinen, that have allowed him to not be alone and shoulder such an immense burden.

In spite of all the help and subtle change that has begun within Okabe recently, there still has to be a very slight part of him that would jump at the opportunity to stay in the Alpha world line with Kurisu. It would, of course, go against everything he had done previously in both series and the story as a whole, but it’s human nature to want the unattainable. For him to reach Steins Gate, he has to dismiss those notions and reject her, effectively killing her again in his mind. Though, in order to do that, he has to see the weight of his actions in the Alpha world line. 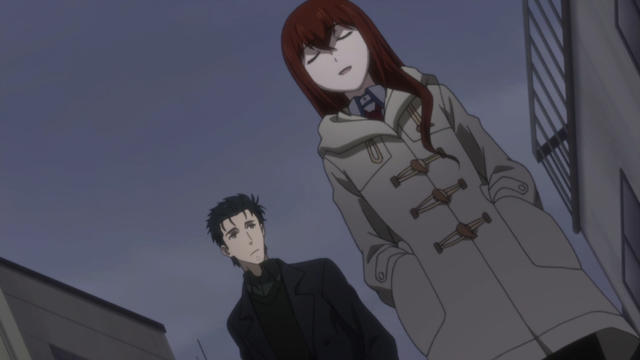 The anime adaptation allows for Okabe to see more of this world by letting him go out and see other people other than Kurisu, while the game limits the player to the lab. This further contextualizes what has happened in this world line for Okabe, including how he has become even more recluse, and how everyone else has tried to come to terms with Mayuri’s death. With the Beta world line, Okabe’s had to suffer alone, with a few exceptions, but here, he realizes that it’s not just him who is suffering.

Despite beginning to see hints of his old self, Okabe is by no means healed of his mental health issues. When Kurisu misinterprets his emotions as being for Mayuri, he is reminded of her death and instantly vomits. It can be easy to forget since Steins;Gate 0 has been more focused on Okabe and his failure to save Kurisu, but he still certainly has layers of emotional trauma from the constant attempts to save Mayuri in Steins;Gate. That is brought back up in the previous episode when Kagari is nearly kidnapped and the scene vividly reminds Okabe of when Mayuri was shot by SERN Rounders. That deep trauma isn’t going to go away anytime soon. Even with Kurisu’s help here in the Alpha world line, she can’t make that all go away. 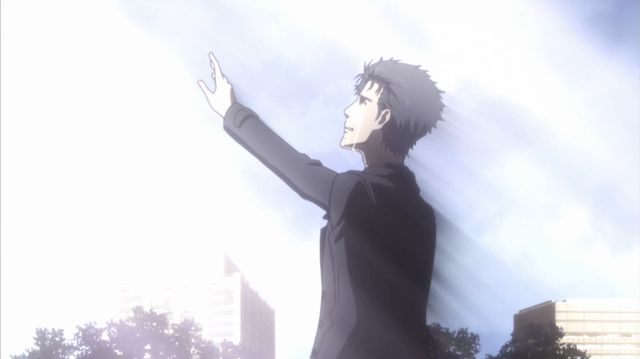 What Kurisu can help Okabe with is to reignite his drive and determination. The pivotal moment of episode 8 is when she brings Okabe to Mayuri’s grave. Okabe is able to remember why he had fought so hard to keep Mayuri alive and mimics how he found her at her Grandmother’s grave with her hand raised into the sky as the sun shines through a grey and cloudy day. It’s emblematic of their relationship that Kurisu would be the one to try and pull Okabe back out of his non-stop grieving because she knows how to reach him in the deepest parts of his being.

With Kurisu’s final pieces of advice to be careful around Amadeus and to try and forget her, she gives him the last push by being the one to send the D-Mail after one last embrace and kiss. Okabe now heads back to the Beta world line with a renewed sense of himself. He’s still not completely healed, but the spark within him has been reignited. Once again Kurisu Makise has helped him and in order to repay that, it will be time for Okabe to fight once again against whoever wants to take Kagari and find out what has happened to Amadeus.