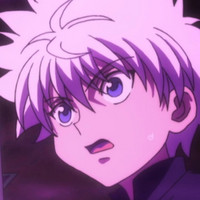 Hello everyone, and welcome back to Why It Works. As the winter weather drags on and the spring season suffers from a variety of delays, I’ve been spending a lot of time rewatching an old classic with friends: Hunter x Hunter. I’ve spoken before about how even within its first arc, Hunter x Hunter is able to create satisfying, distinctive conflicts with novel solutions, in part through its embrace of lateral thinking as a dramatic conceit. But clever plays on our expectations cannot propel a long-running action manga alone; you need to excel in terms of straightforward battles, as well, and making a long series of battles dramatically interesting is actually a harder trick than it sounds. 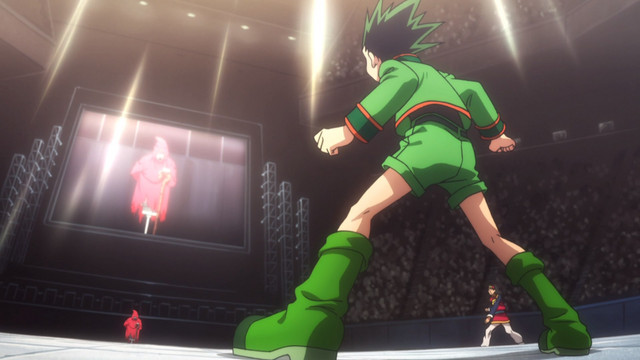 There are always ways you can externally inject a battle with a sense of drama; you can emphasize the emotional or narrative stakes of the fight, or simply execute it with such animated polish that the audience is dazzled by spectacle alone. But to make a great shonen, you want the audience to feel excited about the fights themselves, the actual mechanics of battle, and not just either their consequences or how cool they look. And to be able to invest in the tactical mechanics of battle, you need some sort of understandable framework for evaluating those battles—a system for understanding how powers and strengths interact in your world.

Without the ability to categorize or quantify attacks, fight scenes can ultimately feel a lot like watching children playing pretend. One character says “I use my uncounterable attack,” which leads into “well, I counter with my counter-uncounterable attack,” which leads into “well I throw a house at you,” which leads into “well I throw the moon at you,” etcetera. Such battles can make for exciting visual spectacle, but there’s never any sense of suspense or tension, because there is nothing solid to hold onto in terms of how such vague powers might measure up to each other, and no limitations dictating what any character is ultimately capable of. 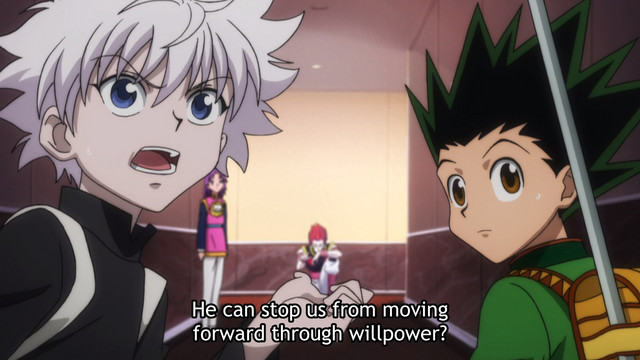 Of course, you also don’t want to be creating a strictly grounded, entirely realistic or number-based system for comparing strength. Simply comparing one character’s power numbers to another’s isn’t satisfying either, and great action scenes demand both tactical weight and fantastical flair. The ideal is thus some kind of balance—powers that feel fantastical and distinctive for each new contender, but which collectively can be understood in terms of some larger system, which allows us to understand how difficult, impressive, or creative each combatant’s feats ultimately are.

In Hunter x Hunter, the solution to these contrasting demands is the Nen system, first introduced in its Heaven’s Arena arc. A character’s “nen” is their aura or life energy, and it can be trained and harnessed for a variety of purposes. Aura can be focused around the body to increase your strength and resilience, intentionally hidden to conceal your presence, and emitted outwards in the form of an energy attack. 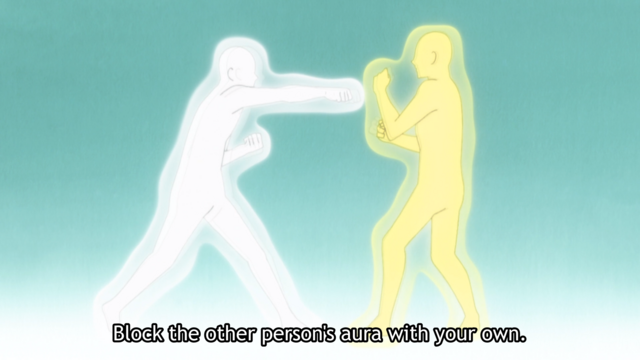 Nen’s mechanics extend beyond “it’s a type of life energy that can be used for energy attacks,” though. All nen users also fall into one of six categories, from enhancers, who are able to enhance the strength of their own bodies through nen power, to conjurers, who can summon objects out of nen entirely. These six categories are framed in a hexagonal grid formation, and the grid pattern actually matters—those who fall in a given nen category will have the least trouble producing abilities from their end of the grid, but great difficulty mastering abilities from the far end. And this system of power tradeoffs extends to individual abilities, as well—the greater the effect of a given nen ability, the more restrictions, preconditions, or consequences for its usage.

Through the nen system, Hunter x Hunter is able to provide a sense of balance and structure to its fights, letting the overall “power levels” of its characters rise up dramatically without ever losing a sense of strategic solidity and point-counterpoint back-and-forth in its fight scenes. The six categories of nen specialists act as natural indicators of “combat specialization,” but with the added significance of physically defining your combat limits. If an opponent appears who’s a terrific enhancer, we instinctively know the solution is likely not to take them face-on; and if the opponent is a manipulator, we know to watch for any traps that might put us under their sway. 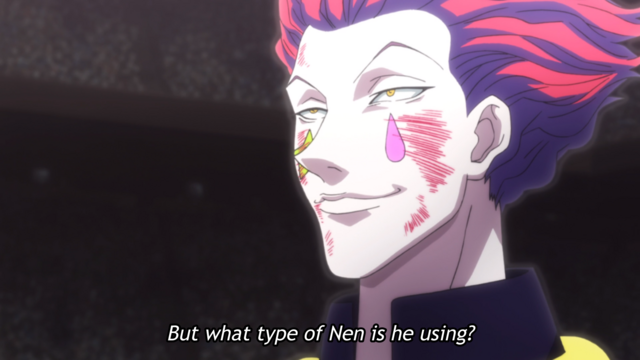 Nen also allows for dramatic levels of self-expression within its tactically grounded system, while also naturally facilitating unusual, nonlinear styles of conflict and combat. Rather than simply categorizing people’s powers via elements or familiars or whatnot, nen provides categories that facilitate fundamentally different kinds of abilities, which further lends themselves to fundamentally different approaches to combat. Very few characters in Hunter x Hunter are ever “evenly matched” - the vast differences in how nen powers express themselves mean every fight is a distinct contrast of almost incomparable powers, which nonetheless still follow the general limits of how you can allocate your nen energy, and what sorts of powers you can express.

Furthermore, because your nen aura is a reflection of your own identity, individual characters’ nen abilities tend to reflect their pasts and personalities. Gon’s straightforward nature and love of games are echoed by his enhancer status and “rock-paper-scissors” special attack, while Kurapika’s methodical nature and vengeful motives perfectly match his own conjured chains. Reading your opponent in Hunter x Hunter is thus not just a way to predict their next move—it can be a route to revealing their entire power base, thus making quick and accurate assessment of your opponent an essential skill. 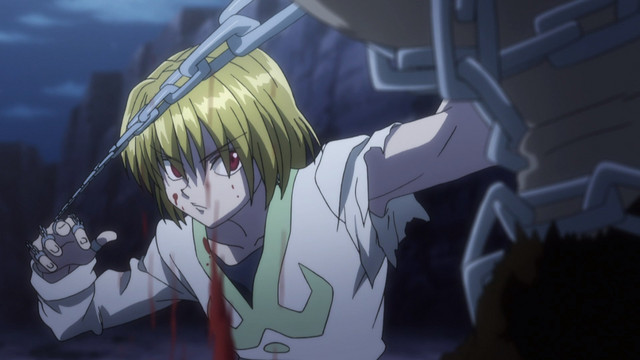 In my opinion, the nen power system sits at a perfect intersection of creative, fantastical shonen powers and weighted, tactically satisfying fight mechanics, while also serving as a unique method of self-expression for all of Hunter x Hunter's warriors. It’s a crucial component of the story’s overall brilliance, and embodies the sturdy dramatic craft that lies at the core of a successful shonen adventure. I hope you’ve enjoyed this exploration of the Hunter x Hunter nen system, and please let me know all your own favorite shonen power systems in the comments!