FEATURE: Attack on Titan — What We Know About Each Titan

With Attack on Titan nearing its conclusion, let’s look at each of the Intelligent Titans’ powers and who they’re fighting for 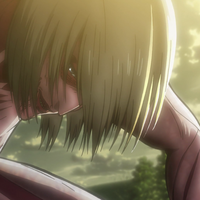 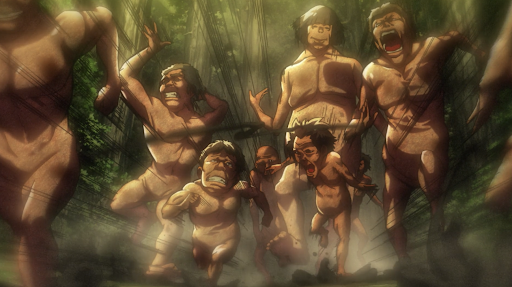 WARNING: MASSIVE SPOILERS FOR ATTACK ON TITAN FINAL SEASON AHEAD

Throughout all of Attack on Titan, a lot of information about the titular Titans has been a mystery. Where do they come from? What exactly are they? Why do they eat humans despite not needing to eat in the first place? Why are there a few specific Titans that have specialized powers? Why can people turn into them?

Over the course of the first three seasons we got a few hints as to the answer to these questions and the nature of the Titans, and by the end of Season 3 even had a few outright answers. With the start of Attack on Titan Final Season we know a lot more about the specialized Titans — how many there are and what most of them can do. 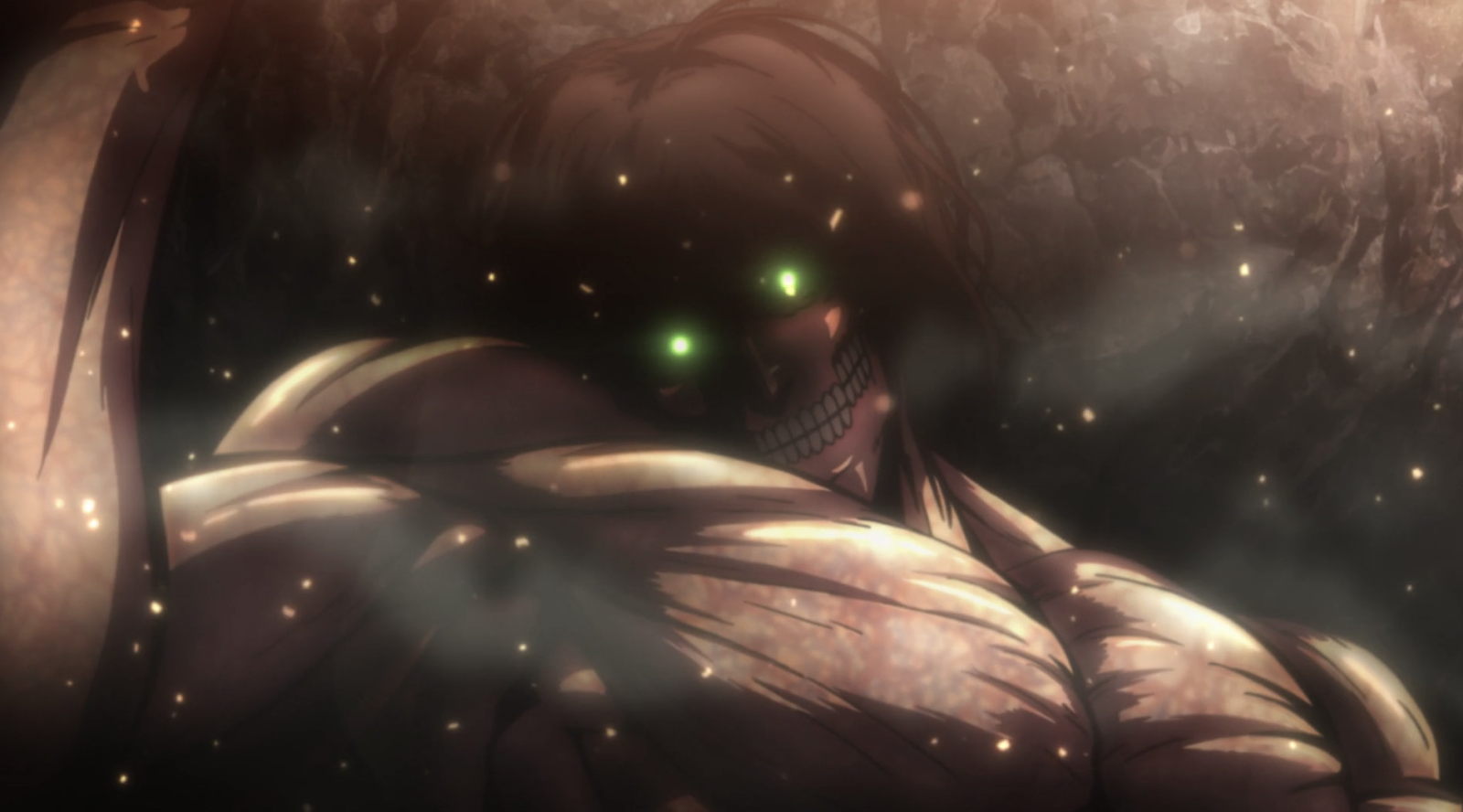 Transformation - Fairly obviously, none of the intelligent Titans are always in Titan form. All of them can use an injury to trigger a partial or full Titan transformation. The number of transformations per day varies based on the user’s skill and will to fight. Partial transformations have mainly been used defensively, but a falling partially formed Titan can still be a serious threat to most people.

Regeneration - An intelligent Titan can heal seemingly any injury to its human body — short of death — given enough time. Eren has also shown being able to regrow partial limbs of his Titan form, so Titan regeneration may also exist for intelligent Titans.

High Heat/Steam - Titans’ bodies are extremely hot, and the intelligent Titans are no different. When a Titan is injured or its human host leaves it, instead of bleeding, it lets off steam, the amount dependent on the size of the Titan.

Titan Scream - Possibly a unique ability, but shown in several of the intelligent Titans. When one of them screams, all nearby Titans are drawn to that location and begin attacking the intelligent one. This is normally used as a desperation plan, as it puts the user at risk of being eaten but forces the enemy to disengage. 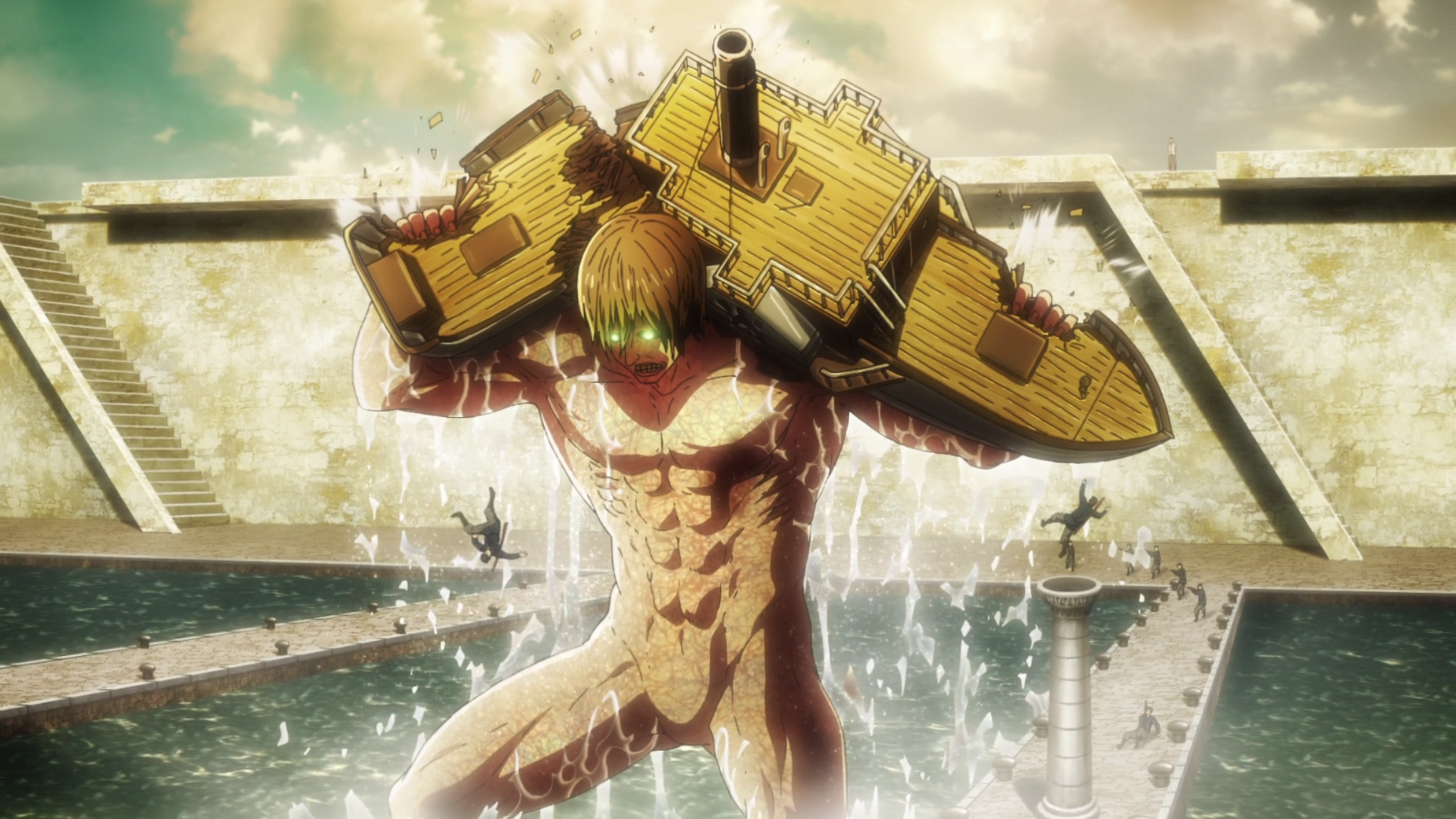 Attack Titan: The Titan at the center of the big human-turned-Titan transformation abilities. It is fast and strong with the ability to call Pure Titans to its location via scream. 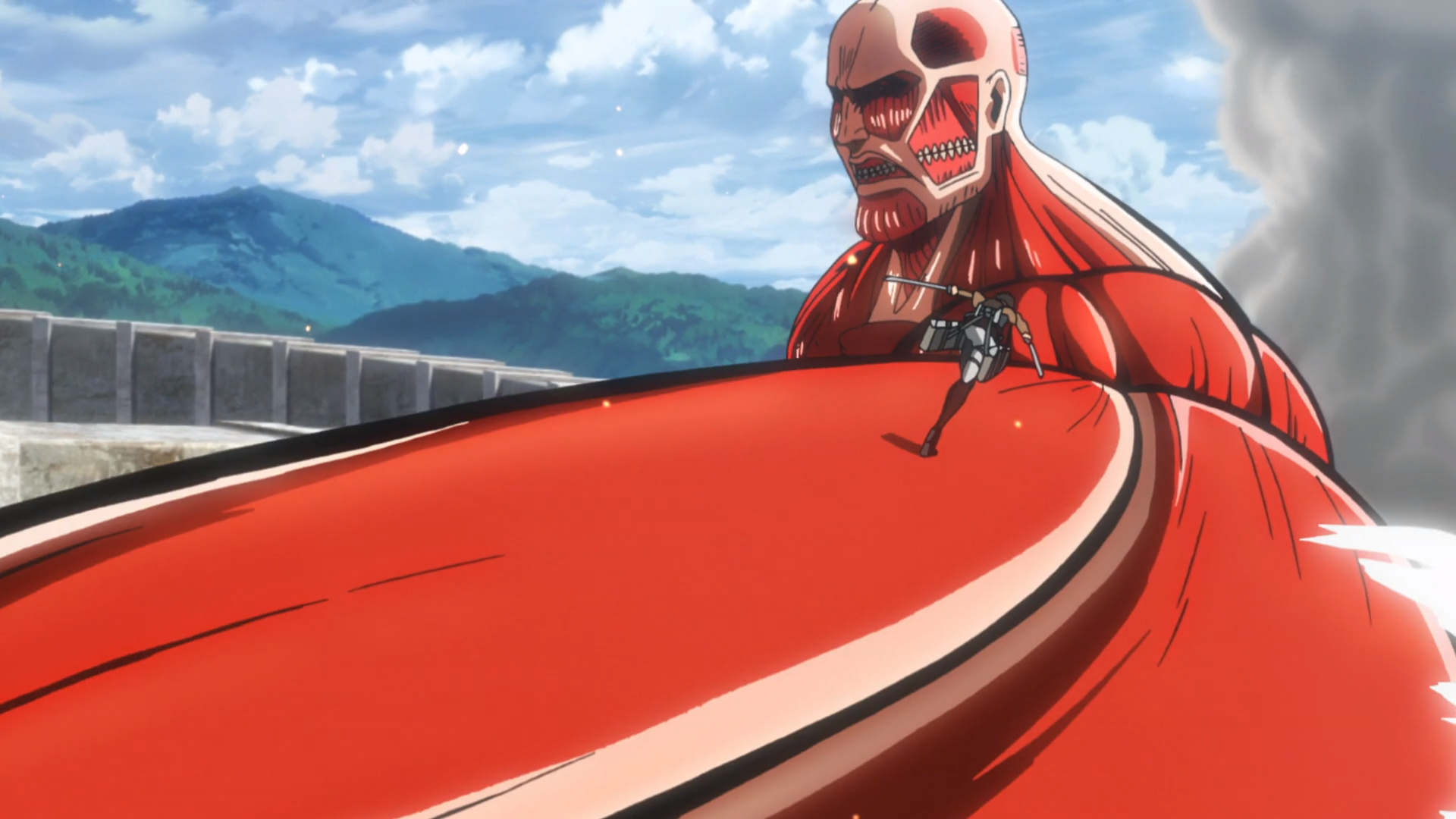 Colossal Titan: The first of the Nine to appear in the show, inciting the fall of Wall Rose. The most obvious special ability is its sheer size. All other Titans are between 2 and 15 meters tall, while the Colossal is 50 meters. Additionally, due to the explosion during a Titan transformation scaling with the size of the resultant Titan, the Colossal’s transformation can be an attack unto itself, destroying anything remotely nearby. The steam Titans let out can also be used defensively to protect the host from attacks by blowing the enemy away and burning them if they stay too close. 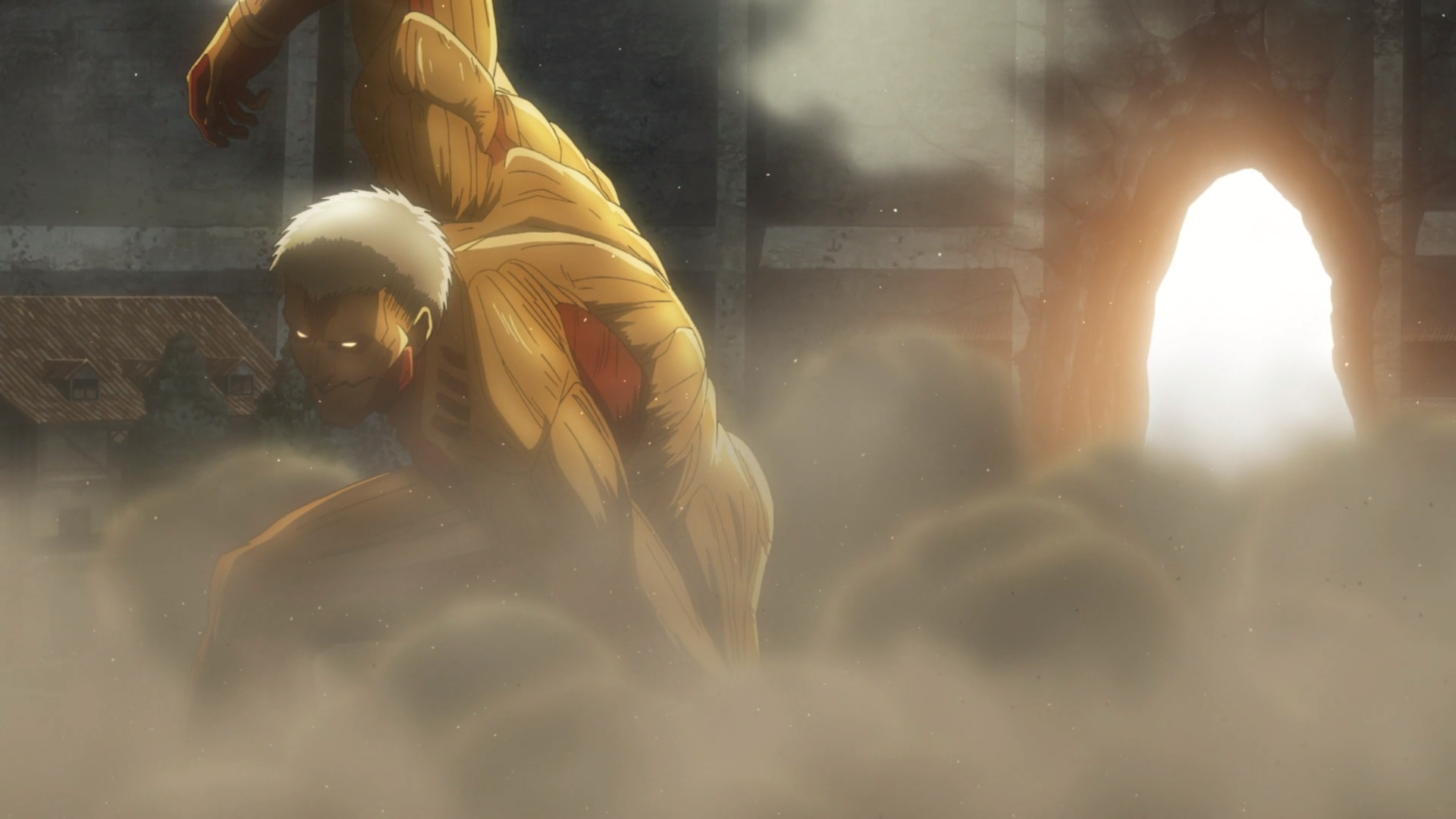 Armored Titan: The Titan that showed up in conjunction with the Colossal Titan in the fall of Wall Rose. Most notable for the armor protecting most of its body being able to deflect blades, cannon fire, and bullets (although it can be injured with high-end artillery). Additionally, the host is able to spread their consciousness throughout the Titan’s body, rather than just in the nape, avoiding otherwise fatal blows (although it is unclear if this is an ability specific to the Armored Titan). 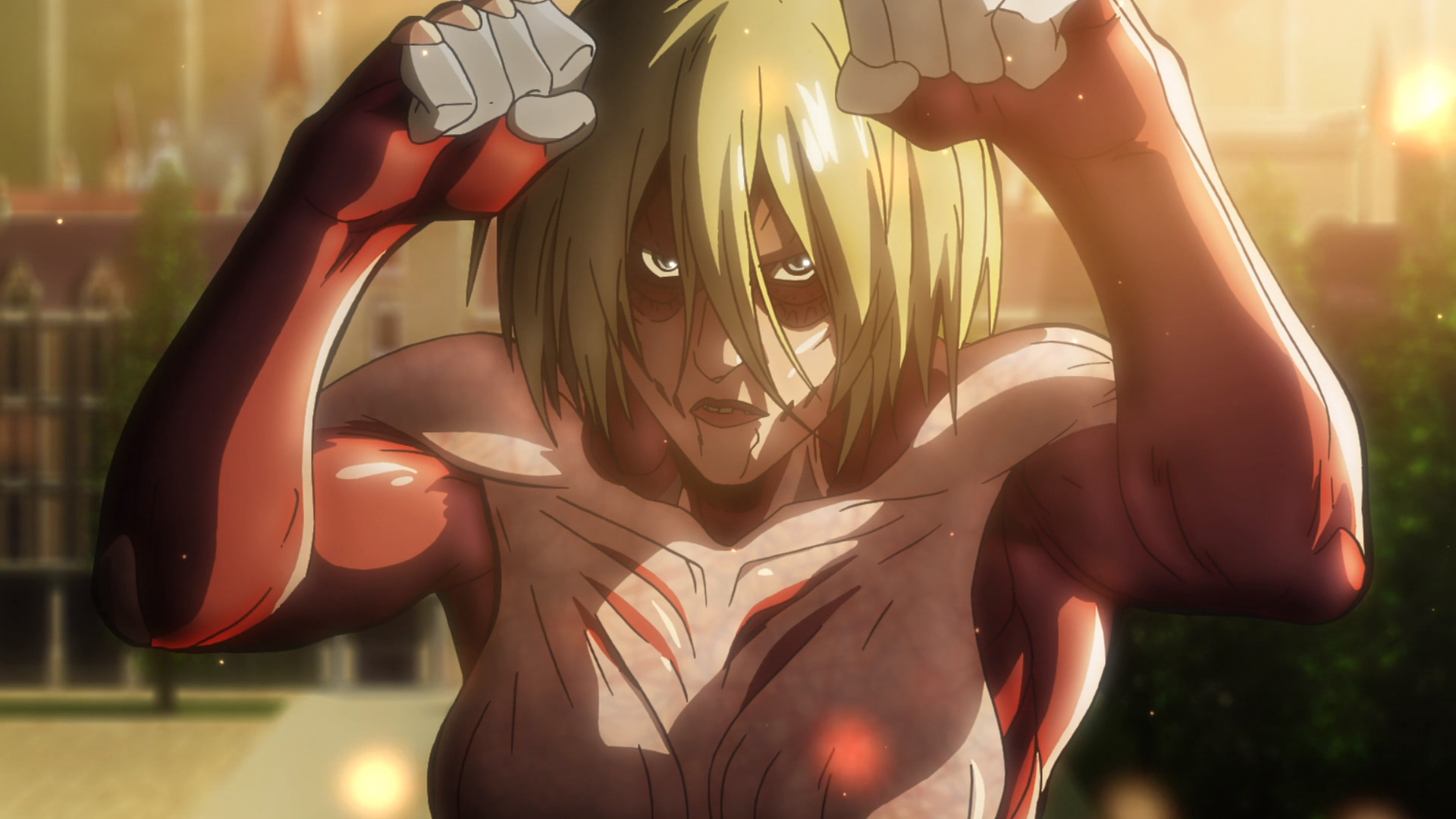 Female Titan: The first true test for Eren after joining the Scouts. The Female Titan appears out of nowhere, displaying more intelligence than other Titans up to this point. She’s incredibly fast, outrunning the Scouts’ horses, and once engaged in a fight, she’s both nimble and shows the ability to harden parts of her body to the point that blades cannot damage the area. the hardening appears more ice- or crystal-like and able to dissipate at will, rather than the Armored Titan’s permanent plating.

Special Condition: Has been encased in crystal since her fight in Stohess district five years ago, her condition and time remaining are not definitely known due to her stasis. 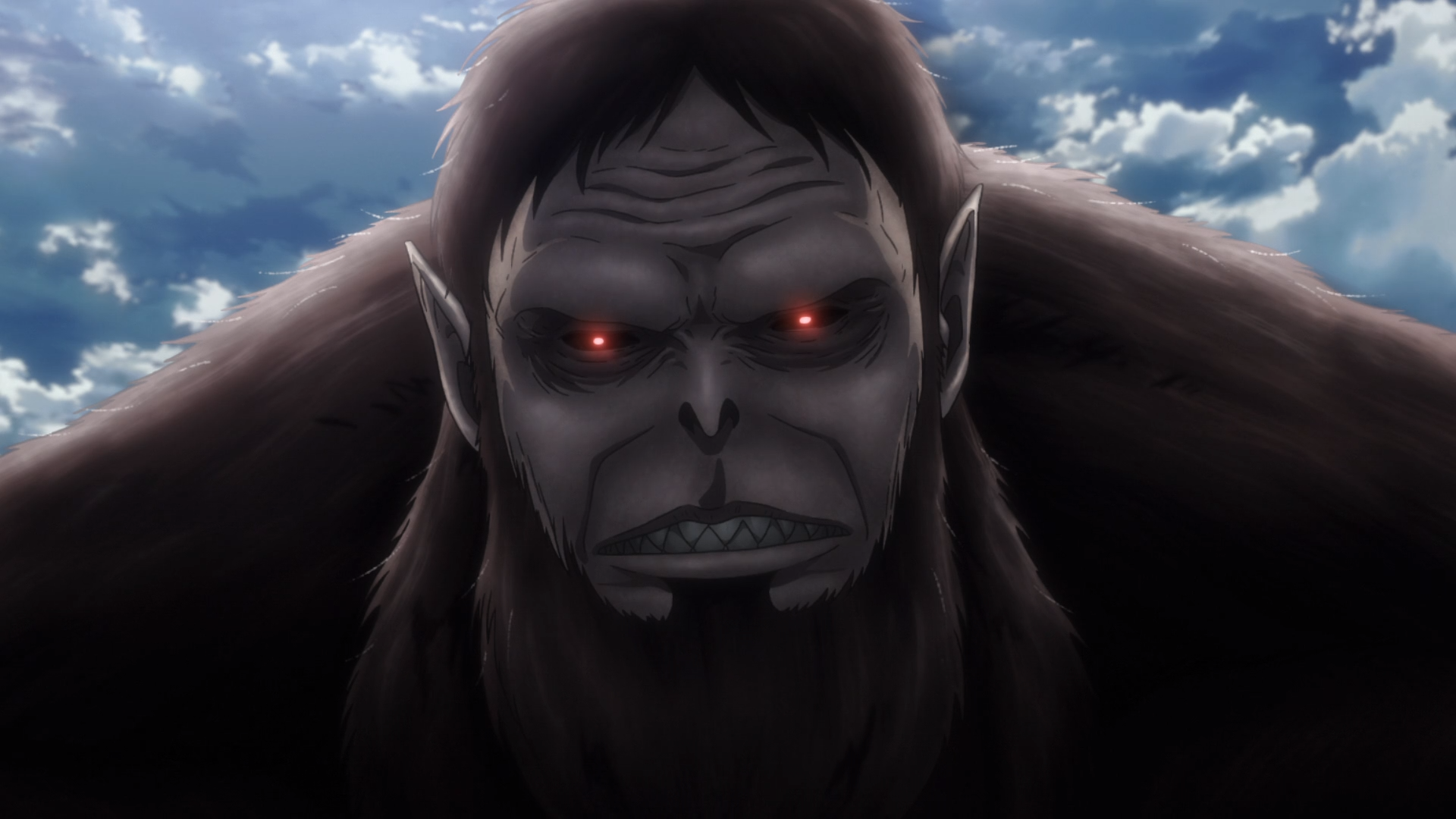 Beast Titan: The first Titan shown with the ability to speak, and the only Titan covered in fur. Has the best manual dexterity of the Nine, with the ability to remove and hold objects as small as the gas jets of a Scout’s ODM gear, and can crumble and throw boulders for a devastating barrage attack. Can command nearby Pure Titans simply by speaking to them.

Special Condition: Possesses the blood of the King of Eldians, can awaken the full power of the Founding Titan. 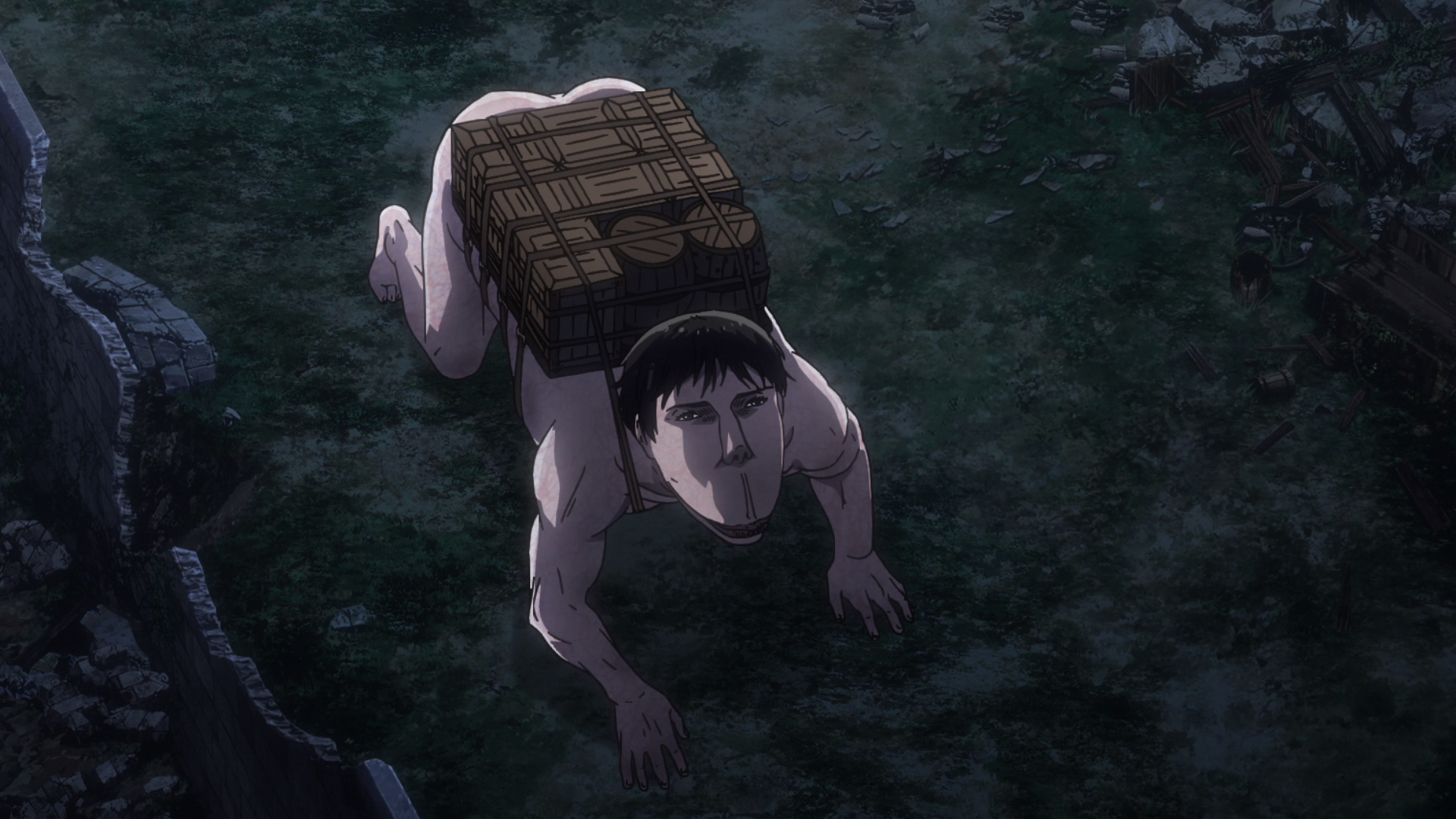 Cart Titan: Showed up alongside the Beast Titan during the retaking of Wall Rose to provide support. Later, revealed to be used akin to a mobile turret platform, with the host working alongside a squad of soldiers who ride her Titan form. The only Titan of the Nine who consistently moves as a quadruped, rather than as a biped.

Time Remaining: Unknown (known to be at most nine years)

Special Condition: Due to her time as the Cart Titan, finds it more comfortable to walk with both hands and feet, rather than standing up when in human form. 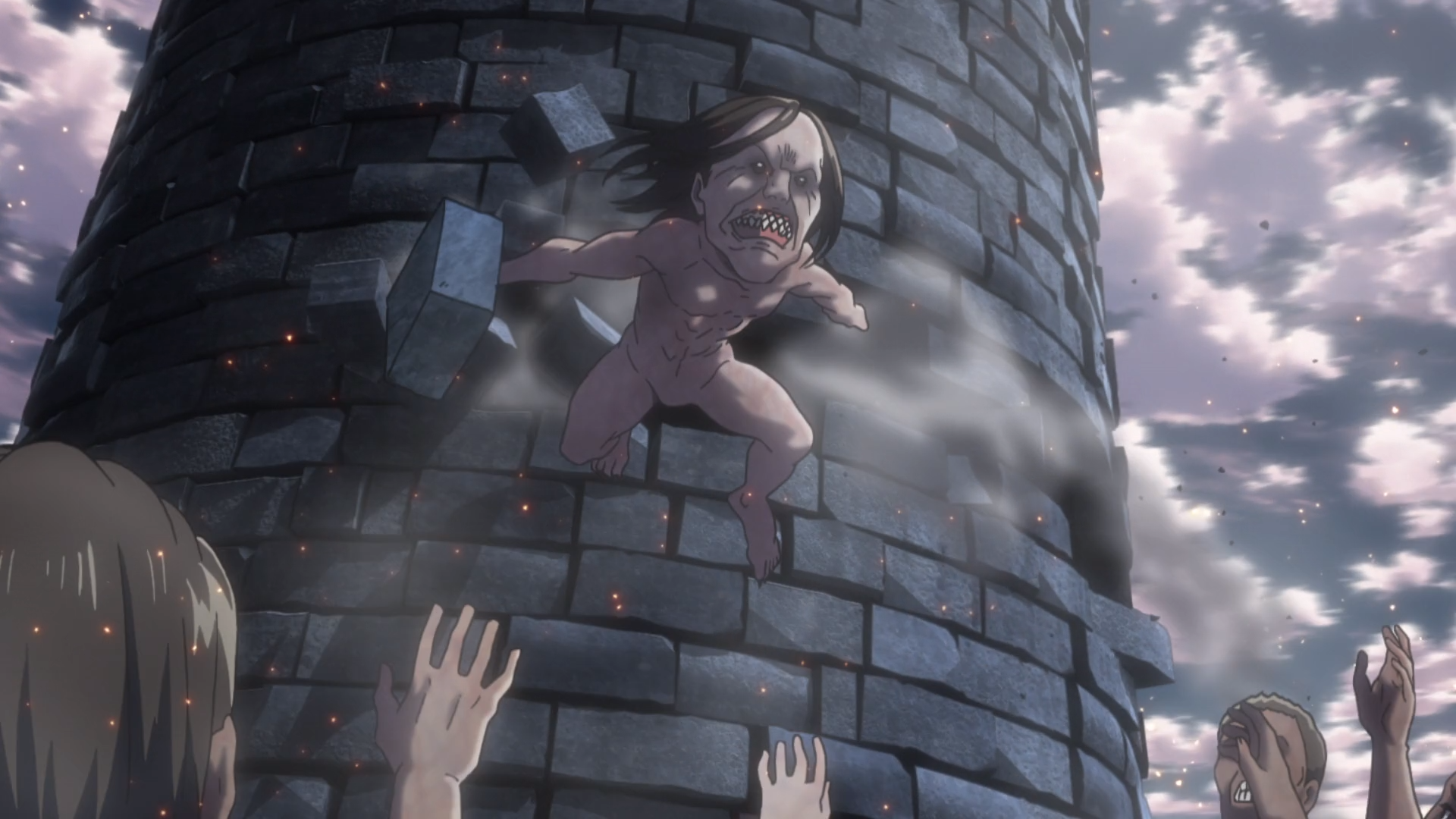 Jaw Titan: Introduced by name along with the Cart Titan, but technically first appears in Season 2 when Ymir first transforms. The fastest, most agile, and smallest of the Nine. When Eren fought the Jaw Titan, he discovered that its claws are sharp enough to cut even the previously indestructible crystal encasements used by the Female and War Hammer Titans.

Time Remaining: Approximately 10 years (possibly as low as 8 or as high as 13 years) 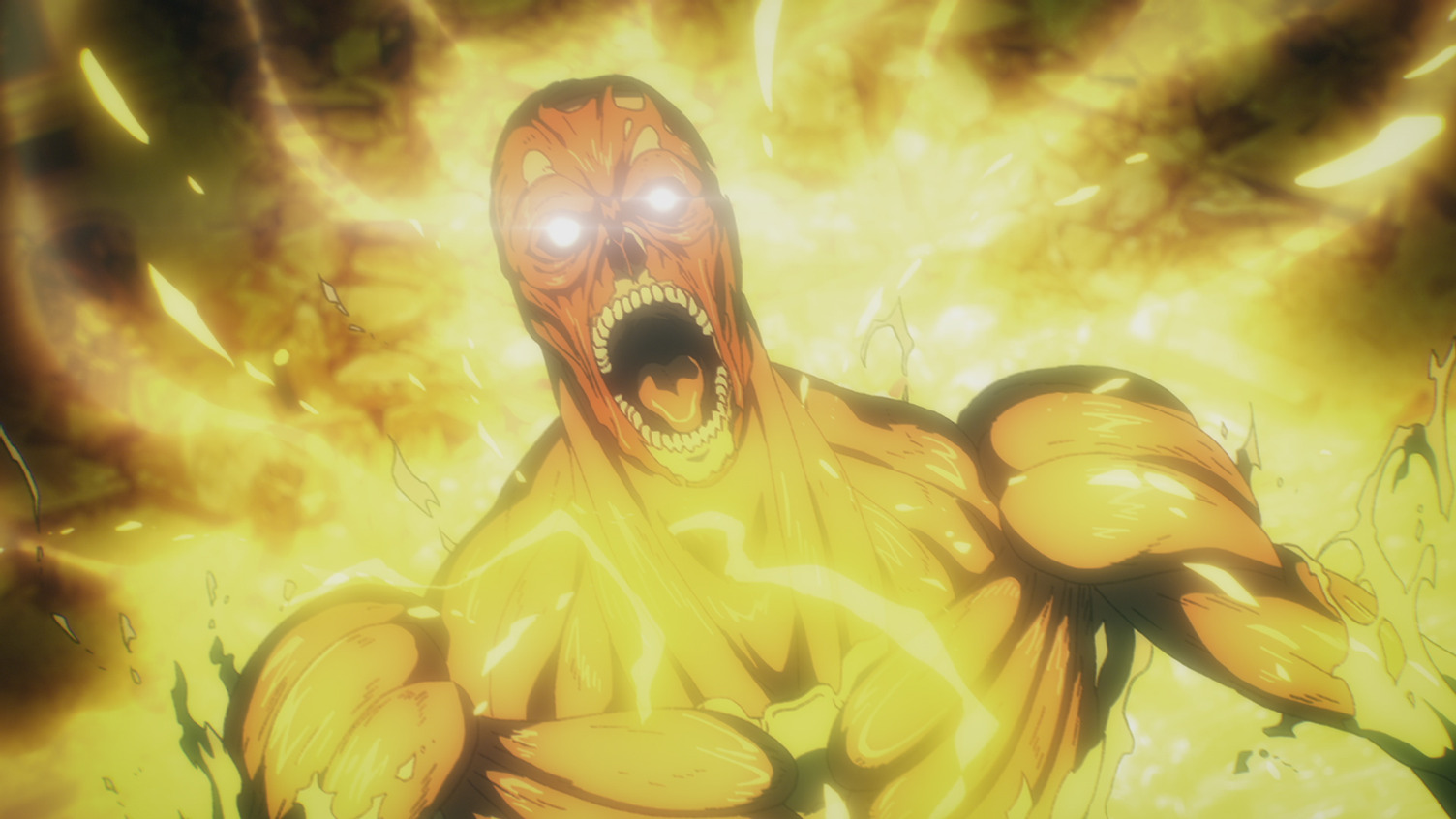 War Hammer Titan: The only one of the Nine to never show up before the final season. Has the ability to manifest weapons and constructs both for its use and for environmental hazards. Can form a crystalline shell around the host, like Annie had done when she was about to be captured as the Female Titan, and can manifest a tether to the Titan body, allowing for short-range remote control. 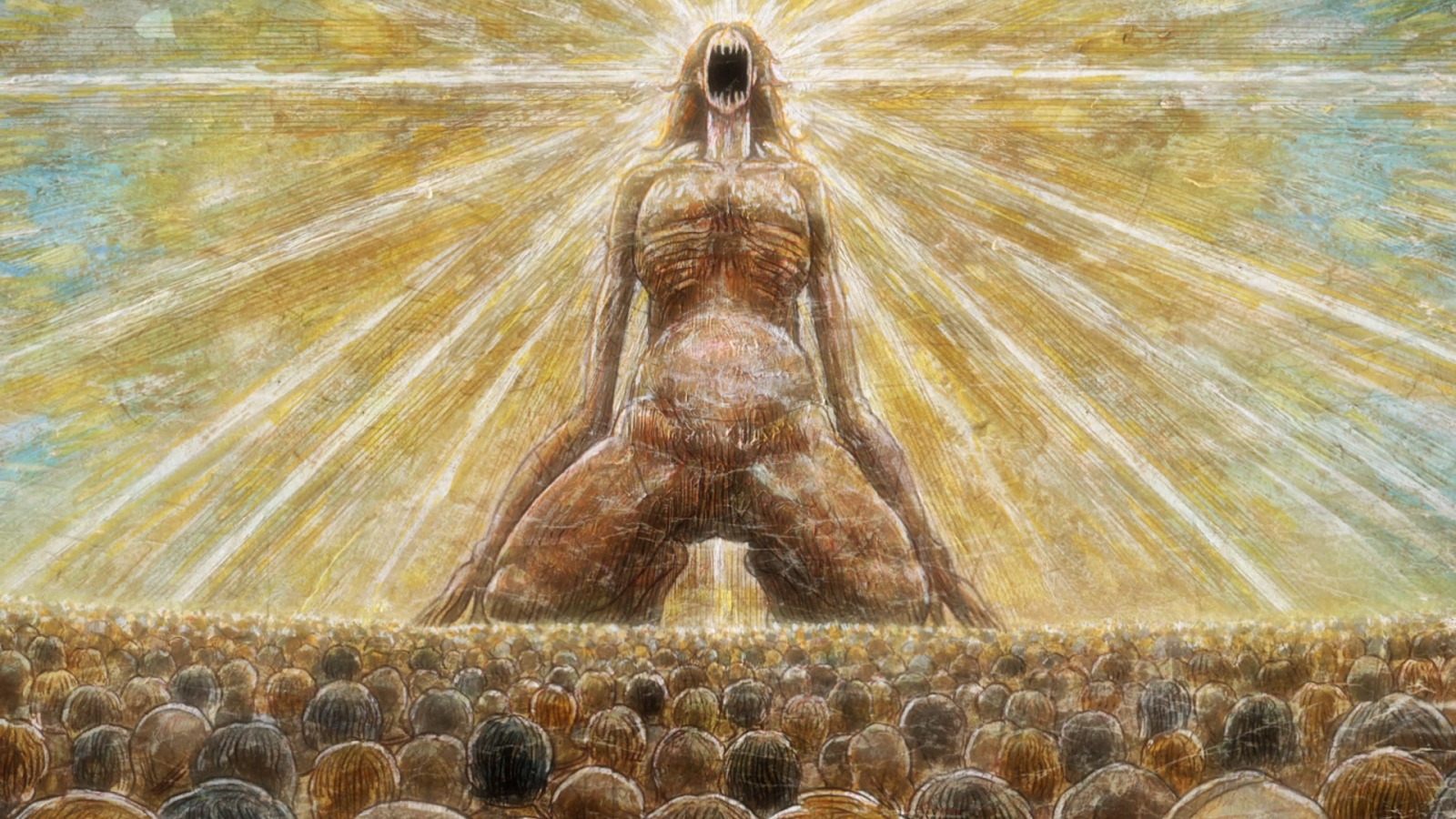 Founding Titan: The most problematic of the Nine, as anyone with royal blood that becomes a host gains the memories of the original king of Paradis Island, which forces the new host to comply with his original vow to never attack the Marlyan Empire. Known powers include being able to control all other Titans at will, including waking up the sleeping Colossal Titans that comprise Walls Rose, Maria, and Sina. Additionally, the host can erase or alter peoples’ memories. It is unknown how this ability changes in the Titan form. However, the full power of this Titan requires the user to either be of royal blood or to touch a Titan with royal blood.

What's your favorite episode of Attack on Titan? Let us know in the comments!