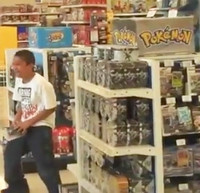 Captured on video: a little kid having a hilarious meltdown over being denied Pokemon by his mom! Maybe some of you have witnessed such a nightmarish scene in public before…or perhaps you’ve been responsible for one yourself! Either way, behold the unspeakable fury unleashed below!

This is obviously the best unofficial commerical for Pokemon ever, but my favorite bits about this clip include the fact that it was taken by slightly older trading card game nerds, and of course, the way the kid storms out of the building probably to spend the rest of his life plotting revenge of some kind. No one is innocent, but some are more guilty than others!