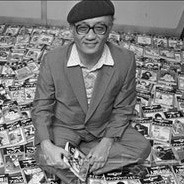 Michael Angelakos, frontman for American electropop band Passion Pit, was sick of music videos looking like commercials for the songs. "From now on I want every music video to be like its own small short film." So, working with British director David Wilson, they created the "Take a Walk" video inspired by Astro Boy creator Osamu Tezuka's 1984 late career experimental anime short "Jumping."

The original Tezuka short "Jumping" - available on DVD in North America from Kino Video under the name The Astonishing Work of Tezuka Osamu - look out for some amusing cameos.