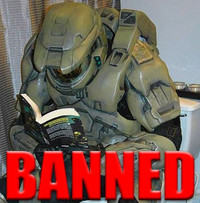 Troll or harass your fellow gamers in Halo 4 and you might find yourself facing some consequences. In a GameSpot interview with Laura Parker, 343 Industries head Bonnie Ross and Halo 4 executive producer Kiki Wolfkill made the point that sexist behavior on Xbox Live is unacceptable and that developers have a responsibility to wipe out sexism in gaming.

Speaking to GameSpot, Ross and Wolfkill pointed out that Xbox Live's zero tolerance policy against sexist or discriminatory comments allows for violators to be punished with a lifetime ban.

"It can be dangerous to give adolescents a broadcast mechanism," Wolfkill added. "There are always going to be jerks out there, and if you give them a way to express that side of their personality without being seen, you're going to see this type of behavior manifest itself."

Ross and Wolfkill went further to say that developers have a responsibility stamping out sexism on their end by putting more thought into how their games will be perceived.

"As developers, we have a personal responsibility to think about how our games come across," Ross said. "With Halo 4, we were very deliberate in thinking about who should be female and who should be male in the game, and if we came off stereotypical, we went back to question what we were doing and why."

Halo 4 is set to launch globally on Xbox 360 November 6th.