Next PSP game arrives in Japan on March 20 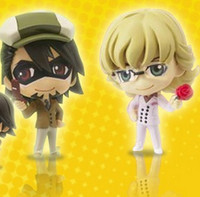 As previously reported, the heroes of Sternbild City are returning to PSP in Japan with the release of Tiger & Bunny: Heroes Day. Tossing a few more bucks toward D3 Publisher's adventure game will net you a pair of limited edition figures that shrink Wild Tiger and Barnaby down super-deformed style.