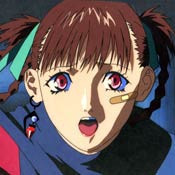 Deadline is reporting out of Cannes that The Weinstein Co. has acquired worldwide rights to the live-action remake of anime crime tragedy Kite. South African director Ralph Ziman (Gangster’s Paradise: Jerusalema) recently finished filming the project after the death of David R. Ellis (Snakes on a Plane).

Samuel L. Jackson stuck by the project which added India Eisley (The Secret Life Of The American Teenager, Maleficent) and Callan McAuliffe (Underground: The Julian Assange Story, The Great Gatsby) to the cast.

Deadline says that the update to Yasuomi Umetsu’s anime is described as a character-driven action film that charts the story of Sawa, a young woman living in a failed state after the financial collapse, where a corrupt security force profits on the trafficking of young women. When Sawa’s policeman father is killed, she vows to track the murderer down with the help of his ex-partner.