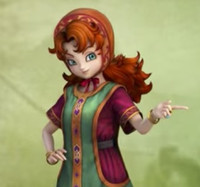 After spending some time with Lazarel and Teresa, followed by a meeting with Desdemona and Cesar, Square Enix is here with the third Dragon Quest Heroes II introduction video. This time Dragon Quest VII's Maribel and Ruff are in the spotlight, so dig into the latest preview below.