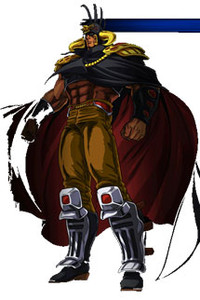 Comparte esta página:
InfoPhotos (1)Reviews (0)Forum (0)Fans (4)Comments (0)
[Editar]
Sinopsis
Raoh is the eldest of the four adopted children trained by Ryuken, the previous Hokuto Shinken master. The manga and anime gives two different origins thorough the course of the story. In his first origin, Raoh and his biological younger brother Toki, were adopted by Ryuken after their real parents died. A second origin shows that a young Raoh and Toki, along with an infant Kenshiro, were actually refugees who were sent to the "Eastern Land" to be trained in the art of Hokuto Shinken by Ryuken.

Raoh trained under Ryuken along with Toki and Kenshiro, as well as another student named Jagi. In spite of his ambitions to become the greatest martial artist in the world, Raoh lost the rights to the Hokuto Shinken succession to Kenshiro. Refusing to give up the style, Raoh killed his sifu Ryuken in combat and formed his own army, taking the name of Ken-oh, King of Fist. Among his many subordinates includes his adoptive brother Jagi, the Toki impersonator Amiba, Uighur the Warden of Cassandra Dungeon, Juda of Nanto Seiken, and Ryuga of the Star of Sirius, among others. Raoh also begins to ride a large black stallion named Kokuoh-Go (黒王号, Kokuōgō?).

Raoh first appears in the story after Kenshiro and his allies destroys Cassandra. Raoh and his army begin to occupy Mamiya's home village afterward. Rei is the first warrior to challenge him, but he proves to be no match against Raoh and is defeated. He is then challenged by both, Ken and Toki, and managed to thwart both. In the end, Raoh fights Ken again and the battle between the two men end in a stalemate, with both too wounded to continue fighting.

After Souther's defeat, Raoh re-emerges to resume his "conquest of the heavens". He gauges the extent of his recovery by challenging Koryu, Ryuken's former rival for the Hokuto Shinken succession and defeats him. Raoh then challenges his brother Toki to a fight and defeats him, but spares his life out of sympathy due to the fact that Toki was already dying from a terminal disease.

Raoh is later fights by the warriors of the Five Chariots, who challenge Raoh on behalf of the Last General of Nanto Seiken. When Raoh discovers that the Last General is actually Yuria, he rushes to the Capital of Nanto to capture her only to be confronted by Kenshiro, who has now mastered the ultimate Hokuto Shinken technique of Musō Tensei, the Unconscious Transmigration of Souls. Raoh manages to escape from Ken and takes Yuria captive with him.

Vowing to overcome the fear he felt fighting Kenshiro, Raoh decides to challenge Fudoh of the Mountains, the first person who ever made him feel fear. During his confrontation with Fudoh, Raoh learns that the only way he can ever learn Musō Tensei is to experience true sorrow. Raoh decides to take Yuria's life to achieve, only to learn that she is already dying from a terminal illness as well. Feeling sympathy for her fate, Raoh is able to master Musō Tensei as well. Raoh challenges Kenshiro to a final battle at the Hokuto Renkitōza, the North Star Mind and Body Training Ground. The two brothers engage in a long grueling battle, in which Kenshiro emerges as the ultimate victor. Raoh praises the strength Ken gained from fighting against other rivals before he uses his remaining life energy to the heavens and restore light to the world.

Raoh's presence figures prominently in the story arcs following his death, as his influences is felt on other characters introduced afterward such as Falco and Akashachi. In the Land of Asura, Raoh was worshiped as a hero by the villagers, who saw him as their only hope against the corrupt ruler Kaioh, who is in fact Raoh and Toki's biological elder brother. The final chapters of the manga reveals that Raoh has left behind a son named Ryu.
Información Extendida
Escribir an extended description!