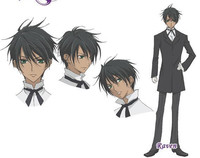 Comparte esta página:
InfoPhotos (2)Reviews (0)Forum (0)Fans (6)Comments (0)
[Editar]
Sinopsis
Raven is 18 years old at the beginning of the series, and Edgar's personal servant. He is Ermine's half-brother. He possesses mysterious green eyes and exceptional fighting skills. It is revealed that Raven was born with a sprite residing within him, and for this reason he was not acknowledged by many. Edgar has mastery over the sprite, and hence Raven. According to Raven, Edgar would never take advantage of this power. And because Edgar accepts him despite his obscurities, Raven is pleased to serve him.
When Raven and Ermine were young, they were taken in by Prince's organization. Raven was then trained by fighting masters, but due to the speed at which he surpassed them, and his inability to control his sprite's killing impulses, as well as his own indifference to killing them in the course of his training, he eventually ended up being chained and locked away. This was where he met Edgar for the first time, when Ermine brought Edgar to meet Raven, telling her brother that "she had found his master". While the sprite within Raven was actually supposed to serve and protect the king of Raven's (and Ermine's) tribe, Raven immediately accepted Edgar as such. It was then that he received the name "Raven", which Edgar gave him to signify that he was to be the master of his sprite from now on, instead of the other way around.
It is shown, however, that the sprite's obedience to Edgar is not absolute. When the sprite's killing lusts override Raven's own will, even Edgar is unable to stop it.
Later on, it is revealed that there are actually two sprites within him; one of them is a giant serpent, and the other as a giant bird. The giant serpent is the original servant of his tribe's king, while the giant bird is a manifestation of one of three magical gems sealed within Raven. This is hinted at early on in the series, when Kelpie met Raven for the first time and was unable to immediately identify whether he was a "snake" or a "bird".
His loyalty to Edgar is virtually absolute, and Edgar believes from the bottom of his heart that Raven is one of the few who will stand by him no matter what. He will attempt to accomplish every task Edgar assigns him, even if that includes standing by while Edgar is in danger.
Because he was treated as a killing machine in the past, Raven has become almost emotionless, responding to the commands of those he obeys, and very little else. As the series wears on, however, he begins to show emotions of his own, a fact Edgar is glad about. He also becomes more receptive to other peoples' emotions and begins to display consideration towards them. Together with the slow regaining of normal human emotions, he also begins to express opinions to Edgar, such as stopping Edgar from irritating Nico, and butting in sharply when another woman attempts to seduce him (because he understands that Edgar giving in would have repercussions on Edgar's and Lydia's relationship).
He is deeply happy about Lydia marrying Edgar, and is, in fact, frequently anxious that Edgar might do something that would make her turn away from him. Once, when Edgar asked him which female Raven thought suitable to be his countess, he answered that he would prefer Lydia to be the one.
His relationship with his half-sister Ermine seems rather distant, due to his upbringing. He places Edgar far above Ermine, and sought to kill her after her second betrayal. However, he was also the one who pleaded with Edgar on Ermine's behalf to allow her to serve Edgar again after her first betrayal, and he had also hidden his suspicions about Ermine from Edgar briefly despite his overwhelming loyalty to Edgar.
He apparently does not like how young/childish his face appears, as he was noted by Ermine to have brooded over how a couple of maids thought he was only 15 years old. He is apprenticing under Tompkins in order to learn the skills of a butler. Lydia surmised that this is in preparation for the day Edgar defeats the Prince and obtains true peace, and Raven's fighting skills will no longer be useful to Edgar.
He forges a tentative friendship with Nico, standing up for Nico in the face of Kelpie's wrath.
Información Extendida
Escribir an extended description!