What the "School Babysitters" Anime Gets Right About Child Development

A real-life toddler teacher weighs in 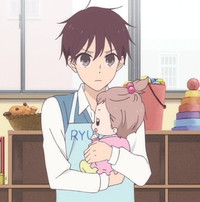 What the "School Babysitters" Anime Gets Right About Child Development

Kids in fiction are hard to get right. Most adults aren’t used to them or know much about them, so they seem like these strange little balls of irrationality. The natural humor of little humans trying to figure out the world can be tough to nail down, so writers often resort to overly-precocious smart-alecks. But what a lot of people don’t realize is that, if you spend enough time around them, small children are actually pretty easy to understand. While they are all individuals, they develop in predictable patterns of what they are and aren’t capable of at different ages. 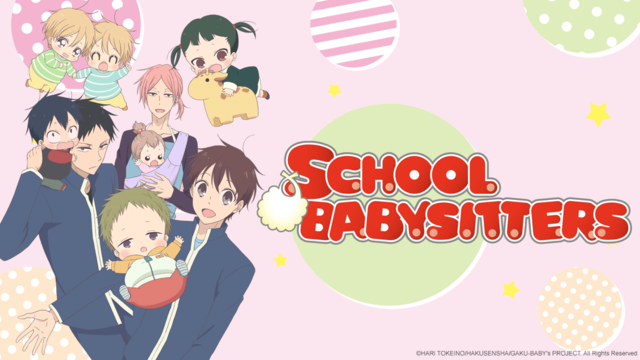 With all that in mind, I was pretty nervous about School Babysitters. As a toddler teacher, I spend 40+ hours a week around one- and two-year-olds and poorly-written children irk me like nothing else. Luckily, the first episode charmed me with believable, developmentally appropriate depictions of toddlers. Their personalities felt familiar as broad personality types, and the barely-controlled chaos of the room reflected a reality I’ve lived many, many times.

I’ve pegged the children of the Babysitting Club as around two-and-a-half, except Midori, who’s clearly under a year old. Although they’re drawn as very small in proportion to the teens and adults in the series, their physical, verbal, and cognitive abilities fit that age range. 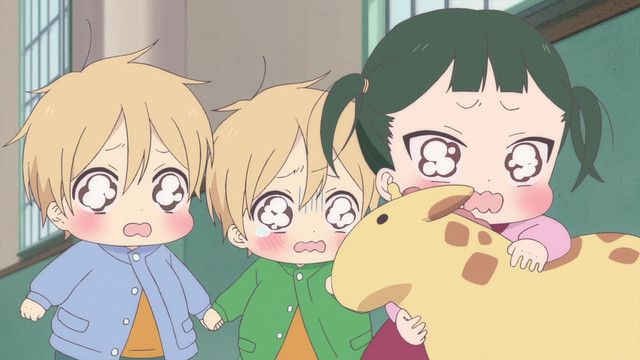 One of the defining features of the toddler years is big emotions that they don’t fully understand or know how to deal with. Tantrums abound as kids get overwhelmed by their own feelings and their relationships with others. When Taka refuses to leave with his brother in the first episode or bursts into tears because he misinterpreted Hayato’s statement that he doesn’t like or hate him, he’s not just being a brat. He doesn’t understand that Hayato’s a stoic person who struggles to express his affection clearly, only that he’s cold to him. Taka doesn’t get that the daycare is closing and everyone needs to go home; the way he sees it, he’s having a good time and doesn’t see a reason to stop.

Kazuma also struggles with his own big feelings, particularly his anxiety. He appears to be constantly on the verge of tears, with his big watery eyes and wobbly mouth, and his more boisterous twin brother offers him support when he falls down and cries. When their father, Kousuke, comes to visit, Kazuma just runs away and cries, refusing to play with him. Kousuke worries that it’s because he’s not around enough and Kazuma doesn’t recognize him, which is actually a pretty fair guess. Toddlers have a natural fear of strangers until around two years old, and Kazuma certainly isn’t the only one to show it; when Ryuichi first enters the classroom, the kids’ first reaction is to run away and hide behind Usaida, the nearest familiar adult. It happens as children learn to divide the world between the known and the unknown, the predictable and unpredictable - and there’s little as unpredictable as new people. 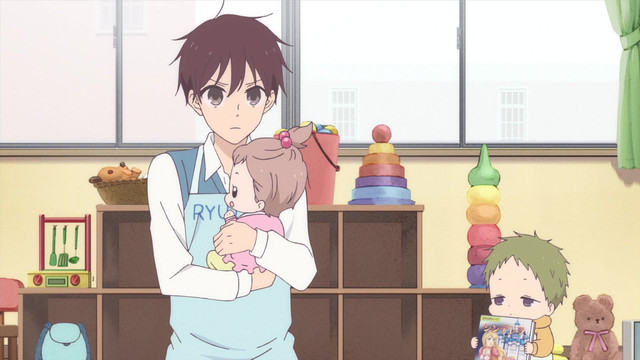 It turns out that Kazuma wasn’t afraid because he didn’t recognize his father, but rather because he thought his father was the kidnapper he played in the last movie they watched of him. Toddlers are still figuring out the divide between reality and fantasy, and Kazuma didn’t understand that the bad guy he saw on the screen was only a fantasy, while the reality was actually his loving father. That trouble finding the dividing line comes up again in the fifth episode, when Kirin decides to try out being a witch. She and Taka fight over whether their Sentai show or witches is real, demonstrating an oft-misunderstood part of child development. It’s not that children don’t understand that there’s no difference between fantasy and reality. They start playing pretend around eighteen months, imitating the things they see the adults in their life do, and their dramatic play only gets more elaborate from there. It’s that they don’t always know what is real and what isn’t. Faced with denial that witches are real, Kirin decides to prove it by flying on a broomstick herself and, when taking off from the ground doesn’t work, she decides to try starting by jumping from a high place. If you accept  the premise that witches exist, Kirin’s logic is sound - the only problem is that she hasn’t grasped that flying on broomsticks is reality, not fantasy, even as she understands that Sentai is fantasy.

When Kirin decides to jump off the stairwell, she’s not just putting herself in danger; she’s actually showing beginning problem-solving and persistence. Problem-solving and critical thinking are some of the most difficult skills to teach, but they’re also some of the most important. Toddlers can identify a problem and try different solutions; it’s up to their caregivers to help them find the right one without out and out giving them the answer. This deepens their understanding of not just understanding what works, but also why. It’s the difference between rote memorization and genuine critical thinking.

When Kotaro makes honey lemon for Ryuichi, he has trouble squeezing juice out of the lemon with one hand. Instead of giving up, he demonstrates problem-solving by using two hands and succeeds, then persists long enough to squeeze out enough to cover the bottom of the cup, as instructed by the Chairwoman. His fine motor skills - the ability to make precise, controlled motions with the fingers and hands - aren’t yet developed enough to juice a lemon one-handed. 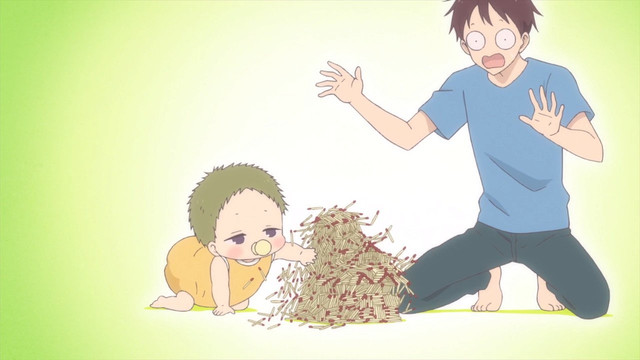 Fine motor skills haven’t really been featured much in School Babysitters so far. The things they’re useful for - drawing and manipulating small objects - aren’t particularly exciting to watch, although the ending theme makes particularly cute use of it. However, a quite a bit of large motor (or gross motor if you’re nasty) development gets featured. The kids are always running or, in Taka’s case, climbing around. They’re a little clumsy and fall down pretty frequently, which is all accurate to the age. If they wanted a little more realism, they could have shown Ryuichi and Usaida constantly pulling them off the bookshelf.

However, the character that shows the most gross motor development, as is expected, is Midori. In the first episode, she falls over from a sitting position and starts crying, unable to get back up. A few episodes later, after a few months have passed as shown by Ryuichi starting high school, she gets up and crawls off when he turns away while changing her diaper. Infants’ motor skills develop rapidly, and just a couple months can mean the difference between being unable to get around by themselves and actively exploring the environment. They can also move much, much faster than their caregivers expect at inconvenient times… just as Ryuichi discovers.

Ryuichi and Usaida don’t always keep as close an eye on the kids as they should, because once those little legs get going, two-year-olds can move fast. Their natural curiosity can lead them to forget or ignore even well-established boundaries, such as when they follow Ryuichi out of the classroom or take off during their tour of the school’s clubs. They naturally end up in a classroom where the students are baking cookies, because small children love sweets - even when parents avoid sugar, most will clear the fruit from their plate first. Inomata’s frustration with the way they end up running amok may make her seem overly stiff, but I sympathize. After all, a high school is no place for unsupervised toddlers, with their curiosity and inexperience with life giving them a knack for getting into trouble. It’s not that she hates them, she just doesn’t know how to deal with them in a place they shouldn’t be. 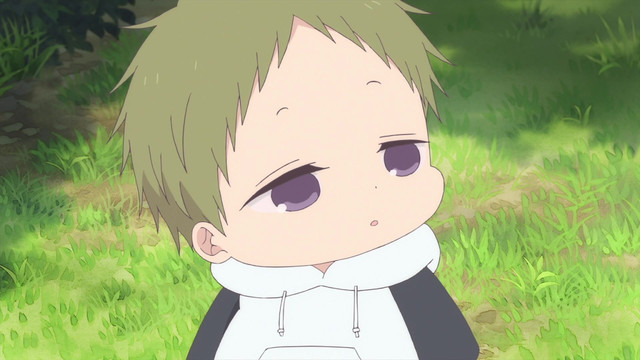 Inomata isn’t naturally good with kids or nurturing just because she’s a girl - the moment she connects with them most strongly comes from their side when she comes to visit their club. At first the children are just as apprehensive of her as she is of them, but when she breaks down crying, they cry along with her. Toddlers naturally lack empathy - their ability to understand other people as individuals with their own feelings is limited just developmentally. They don’t cry because they feel sorry for Inomata. However, young childrens are masters of reading body language; infants can read nonverbal cues from the moment of birth, and lose their instincts for it as they grow up. The children are taking their emotional cues from her - when she’s uncomfortable, they’re uncomfortable. When she cries, they get sad and cry as well.

As Ryuichi learns throughout the series, managing a group of toddlers can be a lot of work and a huge energy drain. These tiny human beings can leave adults so exhausted, my colleagues and I often refer to them as “energy vampires”. It requires constant physical, emotional, and intellectual labor to keep them safe and happy; I can’t imagine going to school and then caring for so many children all evening for free like Ryuichi does. But it’s a far more fulfilling, rewarding job than any other one I’ve ever held, and I’m glad School Babysitters is here to show it for what it is. 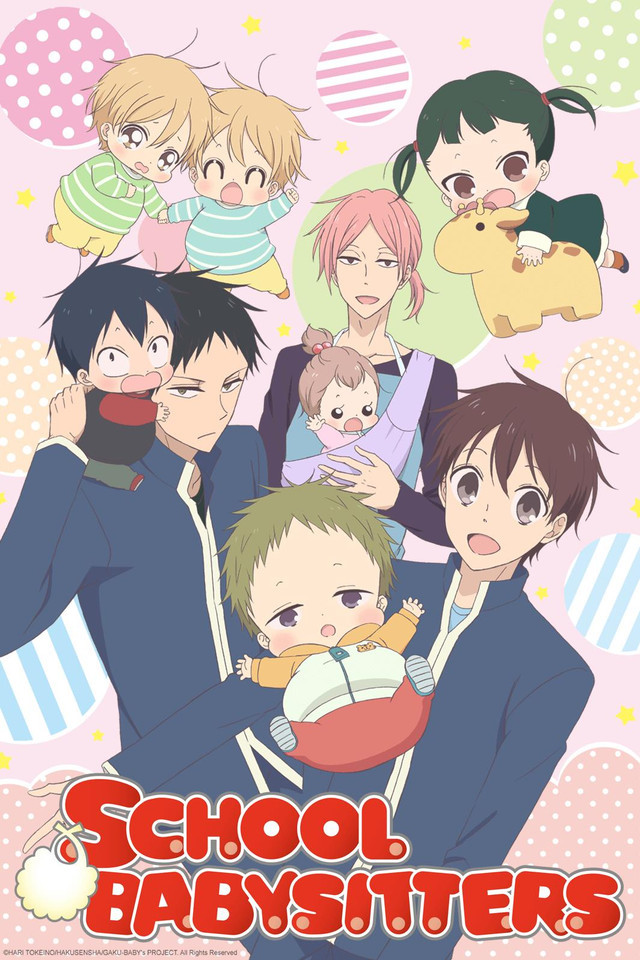